Home > Sports > Year In Review: A Look Back at Merrimack Hockey with Logan Drevitch

Year In Review: A Look Back at Merrimack Hockey with Logan Drevitch 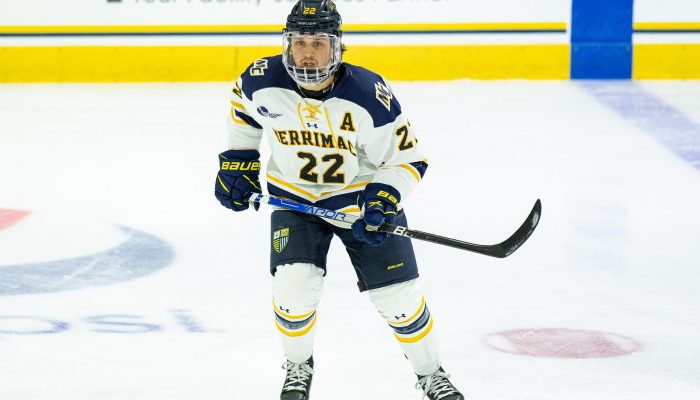 In an effort to highlight and look back at the Merrimack College Ice Hockey team, showcasing how far the Warriors went in the Hockey East Competition, we reflect with assistant captain Logan Drevitch.

The Merrimack team had one of their best seasons in over ten years, finishing the season with a record of 19-15-1. The boys got hot late at the end of the year with prominent wins over Providence and UMass Lowell on back to back weekends. When asked about what one of the team’s defining moments throughout the season was, Drevitch referenced that rivalry game.  “Lowell had always been a rival for us and a very good team in Hockey East. Our team showed so much character and to sweep a top 15 team in the country is very hard to do. Hockey East is such a competitive league that it is very hard to win back to back nights. These games really started to create some buzz for the Warriors who have dealt with adversity in terms of COVID and a new coach in just the past four years. Drevitch described the COVID year as being, “Hard on all of us, [so it] really lit a flame for our team and we felt we had unfinished business to prove.” This team did exactly that, winning 8 out of their last 12 games pushing them to the brink of NCAA playoff contention. But, the Warriors took to the Hockey East tournament as a way to clinch a spot in the playoffs.

With a convincing win against UMaine in front of a packed house at Lawler Rink (6-2), their next opponent was UMass Lowell, who ultimately ended the Warriors season in a 7-2 victory over Merrimack. This was a hell of a season for the Warriors, coming off a COVID season and underperforming since Head Coach Scott Borek took the reins back in 2018. Drevitch, a senior forward who has been with Merrimack since his freshman year, ended his career with 19 goals, 30 assists and playing in 114 games over four years. Through his four years Drevitch just coming in as a freshman was just getting used to the life of a student athlete playing Division 1 Hockey. He acknowledged, “As a freshman I was the furthest thing from a leader. I would follow everyone else and didn’t have a strong impact on a leadership level. I’ve always been around such good leaders and they alway told me the best leaders lead by example and not just talk to talk.”

Going into his sophomore year Drevitch found himself in a bigger leadership role and continued to hone in on his skills personally and gain trust with the team. “Going into my junior year, I felt my leadership skills were very strong and I became a strong leader inside the dressing room. Going into senior year and becoming a captain was a huge accomplishment for me” Drevitch said. Warrior fans had a first hand experience watching Drevitch grow on the ice and helping to establish the team’s credentials. “Hockey has been everything for me at Merrimack and we went through a lot of ups and downs during my time. I want to be remembered for bringing Merrimack hockey back on the map.” Drevitch said.

Clearly an ideal example, Drevitch proved that with hard work and determination you can come out a winner. With the Merrimack name back on the map within the Hockey East competition, the departing senior also made a point to say, “[We have] unfinished business to prove.”As a slew of new recruits are set to join the ranks and improve on an already amazing season, fans of the Warriors should really be excited for what is to come from the boys in blue and yellow.