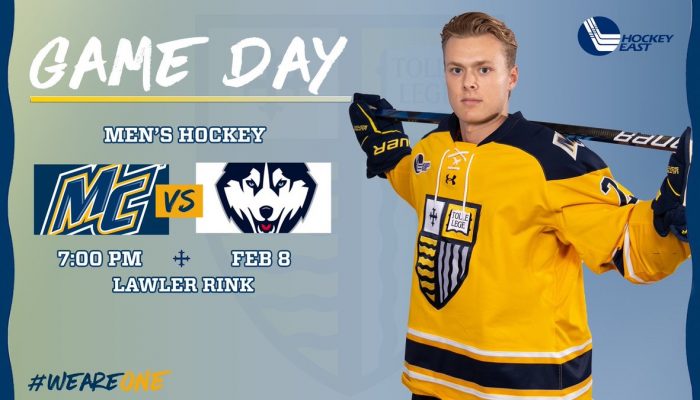 NORTH ANDOVER- The Merrimack College Warriors took on the University of Connecticut Huskies in a fierce game as Merrimack looked to get some revenge after losing their last time to the Huskies 3-2 on January 25.

With a score of 6-2, the UConn Huskies downed the Merrimack College Warriors to improve to 11-6 in conference, while the Warriors fell to 9-9.

Merrimack opened up the scoring early in this one, with graduate student Max Newton scoring on the power play with 12:27 left in the first period. UConn retaliated quickly after, with senior captain Carter Turnball scoring just minutes after Merrimack’s goal. UConn put another one in shortly after their first with Jachym Kondelik scoring with 8:06 left still in the first period.

Merrimack tied it back up early in the second period with Ben Brar scoring with 17:32 left in the second. UConn quickly went back up, with Ryan Tverberg scoring less than a minute after Merrimack. UConn added to their lead with another goal by Vladislav Firstov before the end of the second period.

UConn closed out the Warriors with a goal from Jonny Evans scoring a minute into the third and Chase Bradley scoring an empty net goal in the last minute of the game.

Stars Of The Game

The three stars of the game were Darion Hanson, Jonny Evans, and Ben Brar. Darion Hanson of UConn had a .920 save percentage, saving 23 of 25 shots on the night. Jonny Evans of UConn scored the first goal in the third period to put away the Warriors along with having an assist as well. Ben Brar of the Warriors had one of the only two goals for the Warriors and was the only Warrior who had a positive plus/minus.

Although it is unfortunate that the Warriors lost again to the UConn Huskies, the key takeaway is that they still are in a good position in the playoffs with the way they’ve been playing lately. Merrimack is 7-2 in their last nine games, with their only losses coming both from the Huskies.

With only six games left in the season, Merrimack is in a tight race in the Hockey East standings. Heading into the game against the UConn Huskies, Merrimack was tied for the fourth seed with Providence sitting at 30 points. Following the Merrimack loss, Merrimack remains at 30 points. Something good for Merrimack moving forward is the fact that three of their last six games are against the 5-18-2 University of Vermont, with the remaining three games being against Northeastern and UNH. Hopefully these lighter matchups will put Merrimack into a better position at the end of the regular season heading into playoffs.