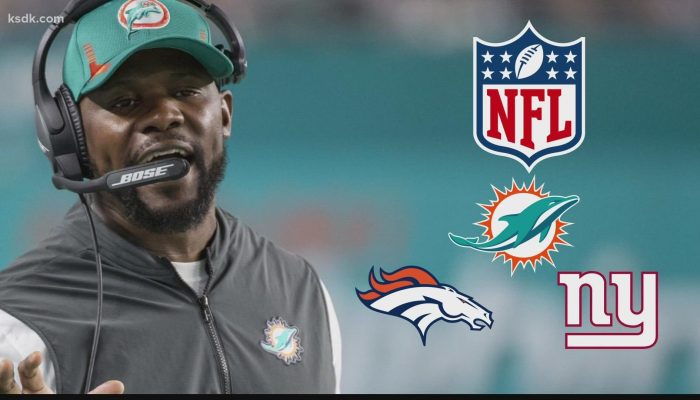 Brian Flores is suing the NFL along with the Denver Broncos, Miami Dolphins, and the New York Giants alleging racial discrimination in the hiring practices in the NFL and his firing last month from Miami. In the past three seasons as the head coach of the Miami Dolphins, Brian Flores led them to an over .500 record in back to back seasons. Which is as many winning seasons as the past 13 combined before Flores while also making the playoffs once. Surprisingly after these solid seasons, Flores was fired as the head coach in Miami last month. Since then, he has been interviewing to become the head coach of another team in the NFL.

Flores interviewed with the New York Giants where he said that the Giants were only interviewing him in order to fulfill their compliance requirements for the Rooney Rule, which states that clubs have to conduct an in-person interview with at least one external minority candidate for any GM or head coaching position. Flores then said how Bill Belichek of the New England Patriots messaged him saying that he had heard from the NYG and that “he was their guy”. Those texts were actually meant for Brian Daboll who was also in the running for the job and got it. Flores stated that his interview was just a sham with the team in order to fulfill the Rooney Rule.

There was another incident with the Denver Broncos when Flores interviewed with the team in 2019. Flores claimed that John Elway, along with others, arrived over an hour later, seeming hungover to his interview. The Broncos have since claimed that the interview was conducted for three and a half hours and claimed it to be a completely genuine interview.

Along with these allegations in the hiring process, Brian Flores also stated that Dolphins owner Stephen Ross incentivized Flores to tank in 2019 and lose games in order to have a higher draft pick. Flores stated that Ross was allegedly offering $100,000 per loss on the season to Flores. He also said that Ross pressured him into recruiting a quarterback prospect that would have gone against the NFL’s tampering rules, to which Flores declined.

The 58-page lawsuit was filed in Manhattan federal court last Tuesday. More updates on the situation are sure to come in the following weeks.