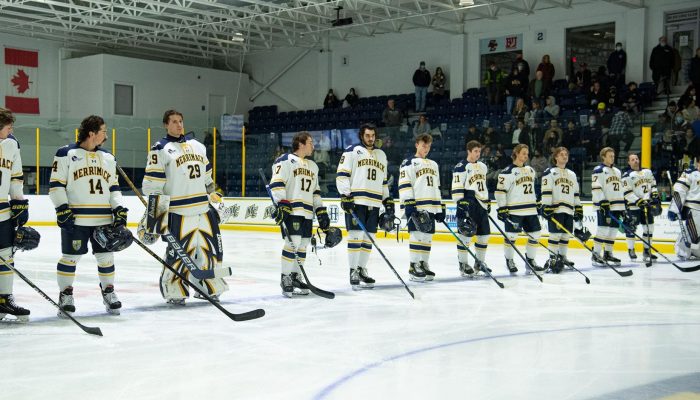 NORTH ANDOVER- Let’s not get ahead of ourselves, the Merrimack Men’s Hockey team is seemingly on fire and for good reason. Building momentum with their current win streak has put the Warriors in a great playoff position and record placement within the Hockey East bunch; proving to be serious contenders against the likes of the top team in the division right now, UMass Lowell. The team has been hot since their 4-1 victory over the Bentley University Falcons on January 8, 2022, one of their first games ringing in the new year. But, that’s not the best part. Since that Saturday night faceoff, the team has won seven of their last eight games. The one where the Warriors weren’t so lucky came from a close battle defeat 2-3 from the UConn Huskies – the only team to disrupt the Warriors winning streak thus far. Given that the Huskies have been the only team to douse the Warrior flame up to now, the matchup in Lawler Arena only feels right to deem as a revenge game.

With the crowd encompassing the bleachers and the crisp air priming the electric bellows from fans, the Warriors were surrounded by noise. Amid the first minutes of the game, Merrimack’s very own Max Newton kicked things off with a slap shot solidifying the game’s first goal. But, that didn’t last for long as the Huskies quickly rebuttal with two quick goals to wrap up the first period with a 2-1 lead over the Warriors.

Ben Brar came up big, bringing the game to its final tying score of 2-2, but a quick even score was broken yet again by the Huskies prominent offense. Even though the Warriors couldn’t climb back from the four point deficit they found themselves in come the game’s conclusion, they put up a fight. The main point being, the Huskies are now a force to be reckoned with in the eyes of a Warrior. The real catch of it all though, is that if Merrimack were to go undefeated for the rest of the regular season, with the Huskies the only one to bring defeat during the Warriors hot streak, I think there may be a new rivalry on the horizon.