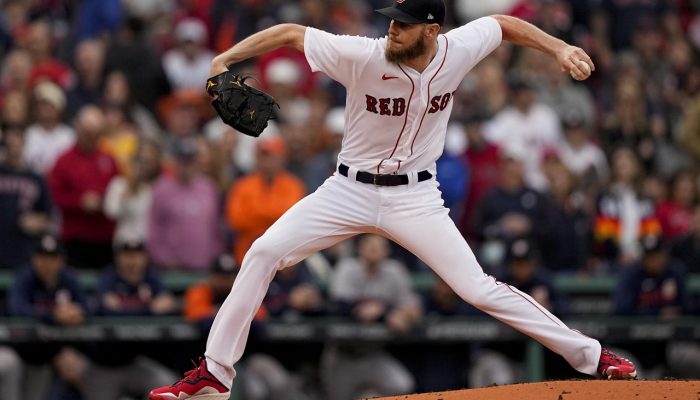 A lot has transpired since December of 2016 when Chris Sale shook the hand of then President of Baseball Operations Dom Dombrowski and donned a Red Sox jersey for the first time. At the time, the 28-year-old Lefty was coming off of seven stellar years as a member of the Chicago White Sox, where he posted a 74-50 record with a 3.00 ERA. Fast forward to 2022, and still now, six years into his tenure with the Red Sox, Sale is faced with more questions than answers.

Did Chris Sale Truly Become an Ace in Boston?

Well, if we’re going by the textbook definition of what an ace in baseball looks like, then the answer is a little muddy. Wikipedia, my favorite information source, qualifies an ace based on three specific characteristics. First, “an ace is the best starting pitcher on a team, and nearly always the first pitcher in the team’s starting rotation.” A healthy Chris Sale puts me in mind of the old adage, when he’s on, he’s on. Sale is just that. When he’s in his zone, there aren’t many pitchers in the league who can touch his excellence. In 93 games started for the Red Sox during the regular season, Sale posts a 3.09 ERA with 815 strikeouts in 562 innings with a whopping 13 strikeouts per nine innings. With a beautiful sweeping slider that makes hitters swing at pitches that smack the plate, and a reliable fastball that tops out at 98, Sale passes the eye test in flying colors. Simply put, he is one of the most entertaining pitchers to watch in all of baseball.

The second Ace qualification is when things start going downhill for Sale. Once again, from Wikipedia, “an ace typically starts on opening day, and is a reliable option for his team.” Since his initial signing, Sale has pitched in only two of a potential 6 opening days. While this sample size is small, it’s telling of a bigger issue regarding Sale’s durability. While he has made 93 starts, he’s only averaged 18.5 starts per year during his five seasons in Boston. With a plethora of injuries to blame, Sale hasn’t exceeded 158 innings since 2017, and missed all of 2020 with Tommy John Surgery. Once again in 2022, Sale isn’t expected to return until late July due to a freak rib injury he suffered during the offseason. This has been a downward trend for Sale, as he was much more durable during his time in Chicago, exceeding 200 innings three times while posting another 192 inning season.

The last qualifying characteristic for an Ace is, “aces are usually preferred to start crucial playoff games, sometimes on three days rest.” The classic knock on Chris Sale is that his playoff performances have been more than lackluster. Chris has only pitched in the postseason as a member of the Red Sox, and holds a 1-3 record with a ridiculously un-acey ERA of 6.35. It is safe to say that this criticism is well warranted, while it is harsh. Sale seems to fatigue as the season goes on, which leads many fans to believe that he gets worn out by the time October baseball comes around. Is this the case? Maybe. Chris has looked better in recent playoff series as far as his velocity is concerned, but he falls into the same category as now removed member David Price, as pitchers who are extremely effective in the regular season but then falter once games carry more meaning. Sale is still searching for his David Price moment, when he can finally get over that hump and alleviate himself of this narrative.

Conclusion: Does Chris Sale still have a lot to offer as a Pitcher?

Yes. While this article might appear to be a Chris Sale bash fest, he still is one of the most valuable players you can have in your clubhouse. Sale’s leadership has been key for the Red Sox, and unlike the aforementioned David Price, Sale is always accountable when he falters, and takes ownership of his mistakes. He encompasses the grit and determination that Boston fans expect from their ball player, which is why he still remains a fan favorite despite his shortcomings. There is no doubt that 2022 will be a huge prove it year for Chris Sale, as he looks to re-write his narrative, and achieve success as a member of the Boston Red Sox.