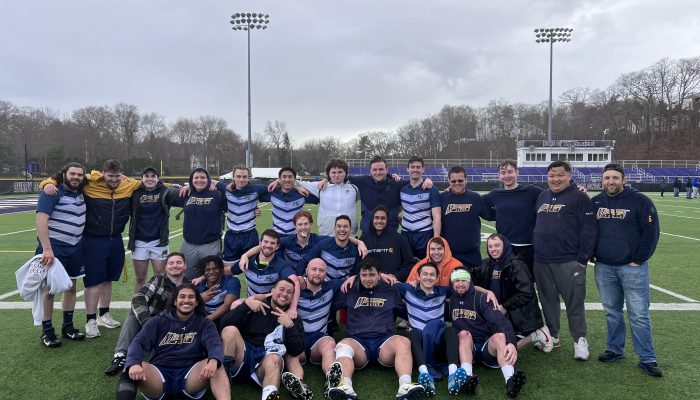 On Saturday April 10th, Merrimack Men’s Rugby traveled to Curry College to play in the Maffie Memorial Rugby 7s Tournament. The eight team tournament consisted of three games of pool play, followed by playoffs. Pool A consisted of Merrimack College, Lasell, Connecticut, and Westfield. University of New England, Curry College, Champlain, and UMass Lowell made up Pool B. It was a great day and the boys braved the elements, time to get into the recap.

Your Merrimack Warriors kicked off the entire tournament when they played Lasell in the very first match of the tournament. They came out hot, never took their foot off the gas, and won in convincing fashion. Shoutout to Ryan Young for finding the try zone three times for the hat trick.

In their second match Merrimack took on Connecticut in a close and physical contest where the speed difference between the two teams played a key role in determining the victor. Dylan Shea, Kevin Bonsall, and Chris Rincon all scored their first tries in this contest.

Merrimack concluded pool play in a close loss to Westfield. The team showed a lot of fight, but in the end it just was not enough. This loss dropped Merrimack to number two in the pool, and set them up to play against UMass Lowell in the semifinals.

The Warriors did not let their loss keep them down. They came out strong and unified against UMass Lowell, and never looked back. The experience of Michael Ferrell and Allen Barata showed in this one as they both intercepted passes and took them all the way back for tries. This victory set up a Pool A rematch in the finals.

Unfortunately, the rematch did not fall Merrimack’s way as the Warriors fell in the finals in a rematch against Westfield. Although the tournament did not end the way they wanted, it was great to be back competing after Covid stopped them from competing in years prior. The Warriors will be playing the Beast of the East rugby tournament on April 23rd and 24th, this will be their final tournament of the semester.