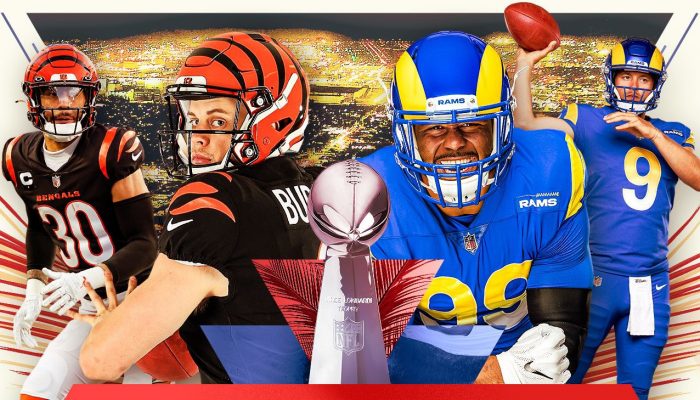 Yes, you heard that right. February 13th the Los Angeles Rams will be taking on the Cincinnati Bengals in Super Bowl LVI at SoFi field in Inglewood, California. After a wild set of championship games both decided by game winning field goals, the matchup is set. The Rams are opening up as favorites to win against the Bengals, especially since the game will be played at the Rams home field. Even with this, the Bengals have been the underdog ever since wild card weekend and have continued to upset every opponent they face including the number one seed Tennessee Titans as well as the Patrick Mahomes led Kansas City Chiefs.

After a season that has included upset after upset with top seeded teams losing to teams like the New York Jets and the Jacksonville Jaguars, honestly we shouldn’t be that surprised with upsets. Even though the Rams are favored to win, the whole country has fallen in love with Joe “Brrrr” Burrow and the Cincinnati Bengals after a Cinderella story-esque playoff run resulting in their first Super Bowl appearance since 1989. Cincy has the chance to win their first Super Bowl in franchise history. Hopefully the city of Cincinnati didn’t jinx the team by already cancelling school in the whole city as CPS leaders wrote, “Staff and students will have the day off to celebrate what we believe will be our city’s first-ever Super Bowl victory!”.

Throughout the playoffs, both of these offenses have been firing on all cylinders. Quarterbacks Matthew Stafford and Joe Burrow have been playing great recently which has led to star wide receivers Cooper Kupp and Jamarr Chase balling out. Over the course of three playoff games so far, Cooper Kupp has 386 yards receiving, averaging 128 yards a game as well as catching four touchdowns. Jamarr Chase is averaging 93 yards a game for a total of 279 and catching a lone touchdown. The Rams have the best defense out of the teams that the Bengals have played in this playoff run. With stars Jalen Ramsey and Aaron Donald leading the stacked defense.

This Super Bowl will definitely be a good one. Look out for the major matchup between Jalen Ramsey and Jamarr Chase. Although Ramsey is arguably the best corner in the league, against the Bucs, he still let up over a hundred yards and a touchdown to Mike Evans. Mathhew Stafford has been playing great in the postseason after ending the season with a few rough weeks. If the Bengals defense can play the way they did in the second half against the Chiefs, then they definitely will have a good chance of winning. Overall, this is going to be a great matchup where either the Bengals will win their first Super Bowl or Matthew Stafford will.