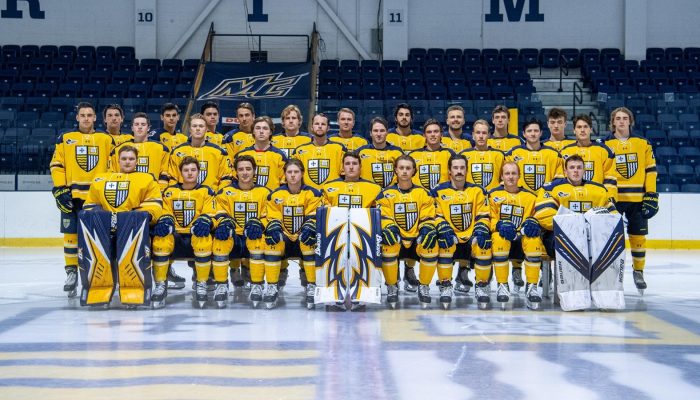 With the Hockey East tournament right around the corner, the Merrimack Men’s Ice Hockey is poised to be in a spot. After a tight series sweep against the Catamounts of Vermont, Merrimack has pushed themselves into the 3rd place position in the Hockey East. The Warriors are now tied with the UConn Huskies. There are three games left in the 2021-22 season with New Hampshire (8-12-1) being the first of three, then there is a two game series against Northeastern (11-7-1) in a Away-Home matchup to end the season. Merrimack has beaten the Wildcats in a previous matchup 5-2. But, this will be the first time the Warriors will be facing off against Northeastern this year. With these three teams fighting for the playoff spots this is surely going to be a tight final two weeks in the season. The Warriors have a 51 percent chance of earning a first round bye in the Hockey East playoffs(finishing top-5), with the way the current standings lineup. Merrimack can easily solidify a spot in the top 7 but in order to finish in the top-three the Warriors would need to win out the next three games. We could very well see another matchup between the Catamounts in the first round or the Bears of Maine while the Warriors control their own destiny with the spots up to fourth place.

Getting into more detail on the NCAA tournament possibilities, the Warriors are right in the thick of it. After dropping to the No. 20 seed overall, in order to qualify for the tournament the Warriors still need to keep winning games. Since the team has won 9 of their last 11 games, the Warriors have kicked it into high gear and given themselves a chance. I truly believe that the Warriors will need to at least advance to the Hockey East semifinals played in TD Garden to have that chance of an at-large bid. So, the Warriors are ready to tackle this next three game stretch and hopefully carry their momentum into the playoffs.