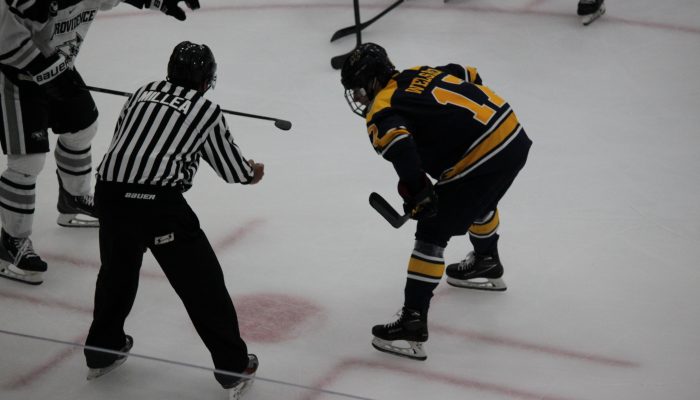 The Warriors have had a successful run in the month of January, defeating #17 Providence in both matchups on the 14th and 15th. They won 3-2 on Friday and 2-1 on Saturday. Before that, they defeated Bentley on home ice 4-1 and routed Brown on the road 7-1.

Merrimack’s goaltending has been spectacular, only giving up three goals all weekend. Ollas started for Merrimack on Friday, racking up 34 saves en route to a Warriors win. Borgiel started on Saturday, only letting in one goal and making a season-high 33 saves. Both netminders have five wins on the year. They also won Hockey East co-goaltender of the week.

The Warriors came up big on both sides of the puck, but they particularly shined on offense. Defenseman Declan Carlile led the charge for the scoring that weekend, tallying two goals over that time span. Captain Max Newton had three assists.

Up next on the schedule for the Warriors is UMass Lowell, who is currently ranked #10 in the nation. Merrimack plays them at home on Friday, then they head to the west side of the valley to battle the Riverhawks in Lowell.