Leadership, Camaraderie and Composure. All Factors in Merrimack Hockey’s first half success. 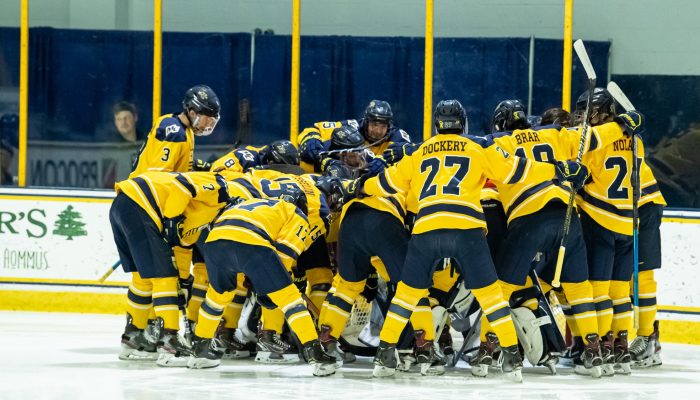 The climb to the top of the College Hockey Standings has been a rigorous one for the Merrimack Warriors. Many had projected the team to fall under the radar but at their winter break they have broken record after record. Pulled off upset after upset. For the Lawler Faithful, it feels like nothing can stop them. The country has been put on notice of the little college that could.

On Merrimack’s last stretch before winter break they took both games on the road in regulation against the UMass Amherst Minutemen (2-1) and the Providence College Friars (3-2). This would put them on top of the UConn Huskies in the Hockey East standings. UConn has dominated the Hockey East the same as MC. But head to head the Warriors notched 7 goals in an upset at XL Center in Hartford a few weeks before break; that result was the deciding factor in whose flag would plant atop the HEA Mountain. The boys completed all this with 3 games in hand over UConn.

In Hockey East, Merrimack’s mid season record is 9-2-0-1-1-0, giving them 27 points in the division. Overall we look even better with a record of 14-3-0. This is historically in the Hockey East era; the best regular season start in school history. Along with that, MC has never been ranked as high across all ranking websites in history.

In the many different power rankings, MC are always at the top. In the NCAA Rankings, we sit 6th. In the Pairwise and College Hockey Network rankings we are 3rd. College Hockey Magazine, USA Hockey and EverythingCollegeHockey has us ranked 5th. Not bad for a small school of 5,000 enrolled students. (All stats are accurate as of 12/13/22.)

But all the hype that Merrimack has received hasn’t gone to the heads of the group. I was blessed enough to be able to talk to a few members of the team about their success and how they were able to get where they are.

Matt Copponi, at the age of 19 has been a breakout star for the Warriors in his second season at MC. Leading the team in Goals. But gives all the credit to the men around him; “I think a lot has to do with our leadership group being excellent. We understand there will always be Ups and Downs, but staying level with our composure has been a key in winning these games,” Says Copponi, “Our goaltending and team defense as a whole I think is about as good as there is, and with that being said we’ve been able to find scoring throughout our whole lineup.”

Another player I was fortunate to speak with was Captain Ben Brar. Who now in his senior season with MC never fails to defend his teammates on the ice. He credits the camaraderie the Warriors have going into battle. “Given all we have been through in the first half of the year we have become extremely close and that has helped contribute to our success on the ice.” Brar continues, “The other factor would be the trust we have in each other on and off the ice, we know each guy in the room is going to make decisions that are going to benefit our team first and foremost.”

The commonality between these answers is a team first mentality. That’s something that Coach Scott Borek preaches first and foremost. I was thankful enough to be able to communicate with him as well. “We have a great locker room that is filled with “we” first people. It sounds cliché but that is the reason for our present success and it will be the reason for our future success.” Coach Borek has turned around the Warriors, taking woes and making them wins. Since 2018, his record with the team has been trending upward and hasn’t slowed down. Merrimack has since gone from the bottom of the barrel to the top of the mountain.

Merrimack has 17 games left to go in the season. Soon enough the regular season will end and MC will look to finish the season strong and clinch their 3rd ever NCAA Tournament appearance (1988, 2011).

With their success the talk has now gone to Merrimack’s first ever possibility at a Hockey East Championship. The furthest they made it was 2011 but lost in the final to Boston College. Wouldn’t winning it this year be neat?

With this team, the sky’s the limit. Matt Copponi is taking it a day at a time going forward. “Continuing to have fun and enjoying the ride is going to be big. We have been able to come together as a group this first half and enjoyed the most of every opportunity we’ve been given, and continuing that will allow us to continue our success.”

All in all there is a lot to look forward to in the Push for the Playoffs. Good Luck to our boys. The School and surrounding North Andover area is behind you! 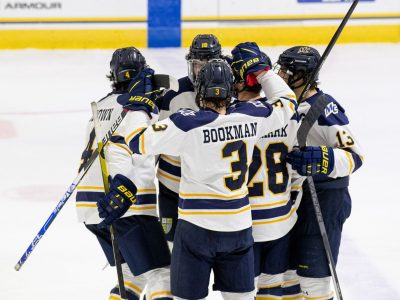 Merrimack Men’s Hockey Looking For a Turn Around 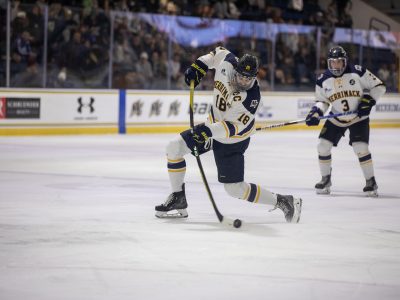 Merrimack faces Northeastern in an important back to back weekend slate 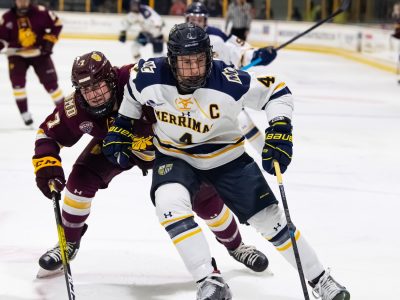 Warriors hit potholes coming off Winter Break. Look to bounce back vs Providence.
About Post Author