Ime Udoka Will Be Suspended For The 2022-23 Season 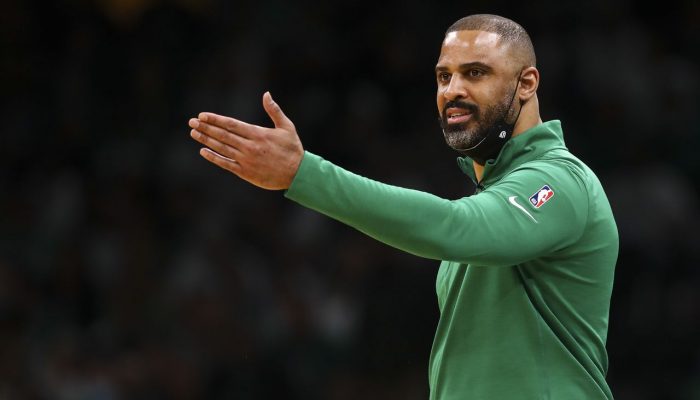 The 2022-23 NBA season is almost upon us, with about a week to go before the preseason gets underway. While basketball fans all around the world are excited for this upcoming season to get started, it definitely isn’t the best time to be a Celtics fan right now. The bad news bears are already hitting the C’s, as earlier this week their starting center Robert WIlliams III is set to have an arthroscopic knee procedure, which means he’ll be out 4-6 weeks. But in even more shocking news, the Celtics head coach Ime Udoka will be suspended for the entire 2022-23 NBA season.

At first, Udoka was getting disciplined because he was having an improper, consensual relationship with a Celtics staff member, which is a violation of their guidelines. However, there was more information to this story which makes Ime’s situation a lot worse. It was reported that Udoka made “unwanted comments” toward a Celtics staffer, and the Celtics hired an independent law firm to conduct a month-long (possibly longer) investigation. Wyc Grousebeck, the majority owner and Governor of the Celtics, revealed that Udoka broke multiple team rules, not just one. Despite knowing of the looming suspension, Udoka had an affair with his fiance, Nia Long, and moved his family to Boston just two weeks ago. It seems as though there wasn’t a “consensual relationship” at all, and this situation could warrant not just a suspension but also a firing of the head coach.

The Celtics made the Udoka suspension official on Thursday night, stating that he violated team politics. They addressed the media on Friday morning, but Grousbeck said that he wouldn’t provide many details about the nature of Udoka’s violations and deferred to the team statement. Ime himself put out his own statement on Thursday night as well, stating: “I want to apologize to our players, fans, the entire Celtics organization, and my family for letting them down. I am sorry for putting the team in this difficult situation, and I accept the team’s decision. Out of respect for everyone involved, I will have no further comment.”.

Udoka’s replacement for this season is assistant coach Joe Mazzulla. In the Friday presser, Celtics GM Brad Stevens had high praise for Mazzulla, as he said, “He’s an exceptionally sharp and talented person. I believe strongly in him and his ability to lead people”. Mazzulla had a domestic battery arrest back in 2009, which Stevens addressed and said that he was “vetted thoroughly” before he was hired. Stevens continued his high praise for Mazzulla: “I believe strongly that that shaped him into who he is today in a really good way. He’ll be the first to tell you that he’s 110% accountable”. Losing Ime is very unfortunate for the Celtics as they went 51-31, and were two wins away from a NBA Finals victory in his first season as head coach, but the C’s will continue to prepare for this NBA season without Udoka at the helm.