Film Review: “One Night in Miami” 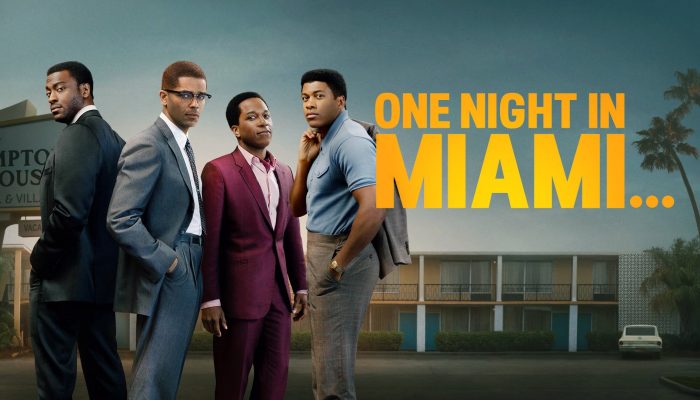 You know it is a down year for movies when some of the best of the year come out of Amazon Prime Video and Hulu. With theaters closed and no discernable time at which they would reopen, streaming services continue to provide the bulk of new on screen entertainment. I’m a little behind with this one, but since the Academy Awards are apparently happening at some point in the next couple months, I figured I should get around to seeing and reviewing Amazon’s “One Night in Miami.”

Regina King’s directorial debut, is the true story of a night in 1964 where icons in activism, sports, and music – Malcolm X, Muhammad Ali, Sam Cooke, and Jim Brown – all met in a motel room and discussed their roles in the civil rights movement. Almost all of the film takes place this one night, after Ali famously beat Sonny Liston to claim the heavyweight championship. The movie was adapted from the play of the same name.

One of the best elements of the movie is the screenplay, and the dialogue. The movie portrays a fictional account of this meeting, as it can never be known exactly what these four men said to each other. Personally, I love movies like this, with famous or iconic people, in interesting situations where the movie tries to show what might have been said or done. The dialogue of these four men is exemplary. Poignant when it needs to be, with splashes of levity, and an unwavering understanding of how these men and their personalities would have clashed. The script takes care to write different dialogue for different characters, so that Malcolm X gets his sophistication and Muhammad Ali gets his signature wit. Regina King’s first outing in the director’s chair is a definite success, especially in some of the larger spectacle scenes, where Ali boxes or Cooke sings.

The four leads in this film are all fantastic. The diversity in the screenplay allows for all of the different characters to have their own identities so all the actors can portray their character as accurately as possible. Kingsley Ben-Adir plays Malcolm X with incredible precision and sophistication perfectly evoking the civil rights icons persona. Eli Gore’s Cassius Clay/Muhammad Ali and Aldis Hodge’s Jim Brown both give fine performances, nailing their characters mannerisms. The real stand out is Leslie Odom Jr. as Sam Cooke, who you might recognize as Aaron Burr, from “Hamilton,” for which he won a Tony award. Odom Jr. is up to the task for the film’s extended scenes of dialogue, but his performances where he sings some of Cooke’s greatest songs, is really where he steals the show.

One very important, little thing, that I noticed is that the casting for this movie was exceptional. These are, of course, four very famous men, in some cases we’ve seen them portrayed before and there would certainly be a lot of interested actors. The film intentionally cast four relatively unknown actors, so that no one actor outshines the others just being present. The film is predicated on the fact that these four men were friends and equals, and this notion makes their conversation more interesting. But if it were three unknown actors and then Will Smith as Muhammad Ali or Denzel Washington as Malcolm X, that superstar actor would certainly overshadow the others. It’s a really little thing, that probably could have made a huge difference in how the movie feels, had it not been handled this way.

My last note is on the movie’s last couple of minutes. Without spoiling anything, I thought the last five minutes of this movie were virtually flawless. The “point” of this film was to show what these men might have said or talked about, but specifically, to show how they were changed or what they did because of the conversation. After almost an hour and a half of sitting in a room talking the last five minutes is a montage of the four mens next moves after the night, showing things like Ali joining the nation of islam or Brown choosing to retire from the NFL to pursue acting. But the crux of the film is built around Sam Cooke and his eventual song “A Change is Gonna Come,, which is performed brilliantly by Odom Jr. in a larger metaphor for the civil rights movement.

I can’t say this film knocked me off my feet, but it was truly captivating through its entire runtime. It’s competent writing and directing and exemplary performances elevate the film and it’s themes revolving around civil rights and these men’s place in the movement is potent. I mentioned earlier that apparently the academy awards are still going to happen and this film is certainly going to be in the conversation for best director, best screenplay, best supporting actor (Odom Jr.), and best picture.

Final Score for: “One Night in Miami”