Boston Fans Could Be Witnessing History 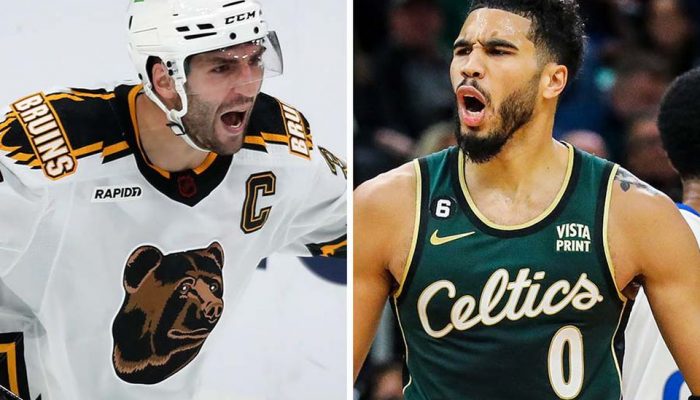 The Boston Celtics and Boston Bruins have been off to incredible starts for both of their 2022 seasons. It seems that every night these teams play, Boston fans celebrate a dub, no matter who the opponent is. To put this into perspective, both the Celtics and Bruins were undefeated at their home arena, TD Garden, in the month of November. The two teams combined for a 16-0 record in front of the Boston faithful, which is a key factor to why each team is near the top of the standings currently. The C’s and B’s are so dominant that they could both break franchise records in the same season. Let’s take a closer look at why both teams have been so successful.

The Celtics haven’t skipped a beat after making the NBA Finals last season. New head coach Joe Mazzulla has done an amazing job bringing this team together and they are an unstoppable force. After a 4-3 start to the season, the C’s have won 16 of their last 18 games. Through 25 games, they have a record of 20-5, which is at least two games ahead of every NBA team for the best record in the league. Their current 82 game pace is a record of 65-17, which would be the 4th best regular season in Celtics season, behind the 2008 season (66-16), 1986 season (67-15), and the 1973 season, (68-14). In 1986 and 2008, the C’s won the NBA Finals, and in ‘73, they lost in the Eastern Conference Finals to the New York Knicks. The main reason for the Celtics success is their incredible offense, with an NBA best 120.6 points per game. They also have the best point differential in the league at a +8.0, meaning they win a game by 8 points on average.

In terms of individual performances, Jayson Tatum is having the best season of his NBA career so far. The Celtics’ leader is playing at an MVP level, averaging 30.8 points a night (4th best in the NBA), with 8.3 rebounds, leading all Celtics in both categories. Tatum is shooting a career-best 48.0% from the field, and he’s been a workhorse, averaging 37.0 minutes a night, which is the 2nd in the NBA behind Anfernee Simons at 37.1. Tatum’s sidekick Jaylen Brown is also playing at an elite level once again. Jaylen is averaging 26.7 points, with 7.1 rebounds a game, while also having a career-high field goal percentage at 50.4%. Other players in double figures include Malcolm Brogdon (13.9 PPG), Marcus Smart (12.1 PPG), Derrick White (10.8 PPG), and Al Horford (10.2 PPG).

The Celtics are also the best three-point shooting team in the league, hitting 40.2% of their triples, with the major standouts being Brogdon (49.4 3P%), Horford (46.6 3P%), Sam Hauser (46.2 3P%), and Grant Williams (45.6 3P%). The C’s are taking advantage of free points as well, hitting 84.4 percent of their free throws, tied for the best in the league with the Miami Heat. As a team, they are shooting nearly 50% from the field with a 49.4% team shooting percentage, which is tied for second best with the Brooklyn Nets. Their offense is unstoppable, and once Center Robert Williams III comes back, it will be over for the rest of the league.

As for the Boston Bruins, they have a record of 20-3-1 through the first 24 games, and they’ve won 17 of their last 20 games. The B’s are currently at 41 points, which is 2nd best in the NHL behind the New Jersey Devils who have 43, however Boston has two less games played than the Devils. The biggest accomplishment for the Bruins this season is their NHL record in home wins to start a season, winning their first 14 home contests. Like the Celtics, the Bruins have the best goal difference in the NHL, at a +43. The 2022 Bruins are on pace to have the best regular season in franchise history, as they’ll have 140 points by the end of the season if they continue to play at this level; smashing their previous record of 121 back in 1970-71. The 140 point pace would also be an NHL record for points in a season, as the current record is the 1976-77 Montreal Canadiens at 132 points.

The Bruins’ best player this season is of course superstar David Pastrnak. Pasta leads the Bruins in every main statistic, including goals scored, assists, and points. Pastrnak has 35 points on the season, with 17 goals and 18 assists, placing him in the top 5 for points in the NHL. His 17 goals on the season (seven on the power play), is tied for 4th in Hockey. There are seven other players on the Bruins with 15 points or more, including Patrice Bergeron (21 points), Brad Marchand (21 points), Hampus Lindholm (19 points), David Krejci (19 points), Taylor Hall (17 points), Jake DeBrusk (17 points), and Pavel Zacha (16 points). Lindholm is also tied for the NHL lead in +/- at +21, which is a statistic that represents the impact the player has on the game based on the difference of their team’s scoring versus their opponent’s when he’s on the ice. Bergeron is also in the top 10 at +/- with a +15.

It also helps that the B’s have the best goalie in all of hockey in Linus Ullmark. Ullmark leads the league in goals allowed per game at 1.93, and save percentage at 93.6%. The Bruins are 14-1 with Ullmark in the net, with his 14 wins also being the most in the NHL. Lastly, the Bruins are one of the best power play teams, and also one of the best penalty kill teams. The B’s have 27 power play goals and their 29.3 PP% is second in the league behind the Colorado Avalanche (31.8 PP%). They also stop 84.6% of power plays which is also second in the league behind the San Jose Sharks (86.3 PK%). The Bruins are truly on a historic run, and there’s plenty of reason to believe they won’t slow down.