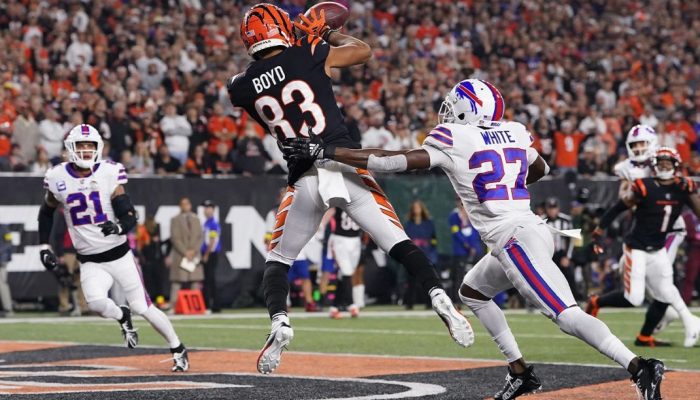 A showdown of elite quarterbacks with elite offenses to decide who is going to the AFC title game. Joe Burrow had a shaky start to the season but has been playing elite football ever since while Josh Allen has had rough games by putting the ball in harm’s way. This is going to be one of the best games all season, let’s get into the key matchups.

Stefon Diggs is the only real threat Buffalo has at receiver. Gabe Davis is a nice deep-shot guy, and Isaiah McKenzie is alright but Diggs is the only one who can threaten the defense on every level of the field, and it’s up to Eli Apple, Cam Taylor-Britt, and Mike Hilton to stop him. When looking at Diggs’ alignment, the snap numbers are pretty even, although he mainly plays outside, his snap distributions are 260 in the slot, 264 as the left outside receiver, and 317 as the right outside receiver. Buffalo will move Diggs around to find the best matchup, and the Bengals need to be prepared for Diggs to line up anywhere against anyone.

Spencer Brown has struggled in pass protection this season, as the entire Buffalo offensive line has diminished compared to past seasons. Hometown Cincinnati hero Sam Hubbard had the play of the playoffs, so far, against the Baltimore Ravens with his fumble recovery touchdown. He has been a very consistence piece of Cincinnati’s defensive line, and he’s going to see Spencer Brown the most this game. With the other pieces of Buffalo’s line, except Dion Dawkins who’s been above average, they have been struggling and that showed against the Miami game and at various points in the season. Hubbard has the ability to win consistently against Brown, it’s up to Brown to try and keep him in check.

Elam and Jackson have been splitting time at the outside cornerback spot opposite of Tre’Davious White. I would predict that the Bills will have White trail Ja’Marr Chase, maybe even safety help as well, so it comes down to the second and third corners against the second and third wide receivers. That matchup can decide how the entire game script from Cincinatti’s perspective. Chase is going to get his catches and yards, Chase only has three games this season with fewer than seven catches, and he only has one game with fewer than 50 receiving yards. Buffalo needs to slow down all of Cincinnati’s weapons, and I think they are completely capable of doing it, especially with Cincinnati’s offensive line injuries.

I’m riding with the Buffalo Bills. I picked them to win the Super Bowl, so I’m riding with them all the way. When Josh Allen is playing well he is the best quarterback in the league. Even when he’s making mistakes, he can offset it with elite plays.