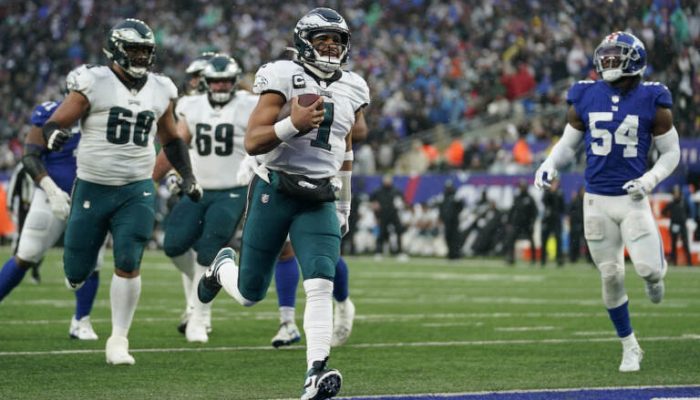 NFC East showdown, round three, will be the second Saturday game this weekend as the New York Giants head to Philadelphia to take on the Eagles. Brian Daboll has this Giants team massively overachieving in year one of his head coach tenure, but can they upset Philadelphia on the road? Let’s break down the key matchups.

When the New York Giants upset the Minnesota Vikings in the Wildcard round their defense played a key role in limiting the Vikings’ rushing attack. Dexter Lawrence deserves the bulk of the credit for that, as he was a complete mismatch for Vikings center Garrett Bradbury. Bradbury is very athletic, but is undersized and has consistently struggled with his anchor when matched up against strong nose tackles. A case can be made that Dexter Lawrence won that game for the Giants, as his pressure forced Kirk Cousins to his checkdown option on fourth and long, which ended the game.

Jason Kelce is also an undersized and very athletic center, so I’m sure the Giants will try and get that same matchup with Dexter Lawrence against a smaller center. Kelce has been in the league for over a decade, this will be far from the first time a team tries to just out-muscle him with a big nose tackle. Kelce has only allowed 11 pressures all season, and in both matchups against the Giants this season he has only allowed a single pressure. His experience and overall better play strength than Bradbury will even the playing field, but this matchup will be critical to both sides as Philadelphia will try to set the tone with their elite rushing attack.

The Eagles have one of the best wide receiver pairs in the league with A.J. Brown and DeVonta Smith. Quez Watkins is an okay change-of-pace guy, and Dallas Goedert is a top-five tight end in the league The New York Giants are working without a good secondary, their best player is Adoree’ Jackson. The former first-round pick is a solid starter but is not elite in the NFL. Their next best corner is Fabian Moreau. Even if he gets safety help, Brown of Smith will have a one-on-one matchup. If the Giants double both then Dallas Goedert has space over the middle, or Jalen Hurts can go and run with the ball himself! Being able to shut down Brown and Smith has to be priority number one for the Giants.

Upon acquiring AJ Brown from the Tennessee Titans in exchange for a first-round selection in the 2022 NFL Draft, he has helped Jalen Hurts take his game to new heights and made him an All-Pro quarterback, and set the Eagles up as the best team in the NFC conference. Wink Martindale is well known for being very aggressive with blitzing and for playing man-coverage, a trend that has continued this season. The major tradeoff with adding extra rushers is that the corners are on an island, and if that pressure doesn’t get there quick enough someone is going to be open and it’s a big play waiting to happen. Jalen Hurts can make those throws, and that’s why the Giants’ secondary needs to find a way to hold up against the Eagles’ wide receivers.

Another trench battle, big surprise, that’s how these two teams are looking to win and it’s the key to stopping Philadelphia because that’s what they do best. Rookie offensive tackle Evan Neal has been experiencing a baptism by fire this year. Neal has allowed a pressure on over nine percent of his pass-blocking attempts, and ten of his 39 pressures on the year have come against the Philadelphia Eagles. On the other side Hassen Reddick, who has primarily lined up against opposing right tackles, has 68 pressures on the season with 14 coming against the New York Giants. This could get ugly quickly, and it did against the Vikings as Neal allowed eight pressures in the victory. The Giants need to find a way to protect Neal from Reddick, or this game can be over quickly.

I keep hearing all the talk about how it’s difficult to beat a team three times in a season, and I’m just deciding to throw it out the window. The Eagles are a significantly better team in every way. I don’t see this game being that close. Brian Daboll is a great coach, but this Giants team has overachieved the entire year and their run is coming to an end in Philadelphia.