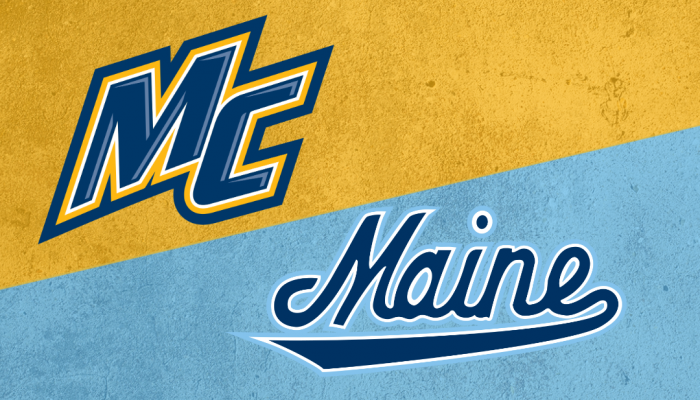 On Wednesday night, the Warriors faced the University of Maine Black Bears in the First Round of Hockey East playoffs. The boys in white were flying around the ice scoring goals left and right to capture the 6-2 beat down in front of sold out Lawler Rink. To start the early onslaught of goals, Steven Jandric scored his eighth goal of the year off a Merrimack powerplay at 12:23 in the very first period. This goal was assisted by Max Newton and Alex Jefferies, no other goals would come in the first period. It wasn’t even one minute into the second period when Filip Forsmarkfind the back of the net making the score 2-0 in Merrimack’s favor. At this point, the Warriors were taking over the game in every facet.

Matt Copponi, scores his third goal of the season assisted by Zach Uens and Mac Welsher increasing the lead to 3-0. The Black Bears would fight back with their first goal of the game scored by Lynden Breen making it 3-1 Merrimack. Heading into the final period the Warriors were in total control as freshmen goalie Hugo Ollas was a brick wall behind the goal for the first two periods. 3:45 minutes into the third period, Newton scored his 13th goal of the year as Jandric and Mike Brown tally assists. The lead stretched to 4-1 and hopes for UMaine started to slowly slip away. This game started to get a bit chippy as the referees swarmed to the players whenever there was a stoppage, putting an immediate stop to any pushing or shoving.

Next thing you know, two more Merrimack goals were scored by Liam Walsh and Newton — his second of the game —  leaving no doubt on who the better team was. With a final score of 6-2, the Warriors clinched their first quarterfinal appearance since the 2017-18 season. Pushing the Merrimack Warriors to 19 wins — which is the most dating back to the 2010-11 season where the program won a school best 25 games. Scott Borek and company will look to keep the momentum this Saturday when they take the 30 minute drive to the Tsongas Center to face the #3 seed UMass Lowell River Hawks. The Warriors swept the River Hawks in a weekend series back in January and are looking to spoil the Hawks run to TD Garden. The game is set for a 4:30pm puck drop.