Home > News > TO FEAR OR NOT TO FEAR: The Importance of Shark Conservation

TO FEAR OR NOT TO FEAR: The Importance of Shark Conservation 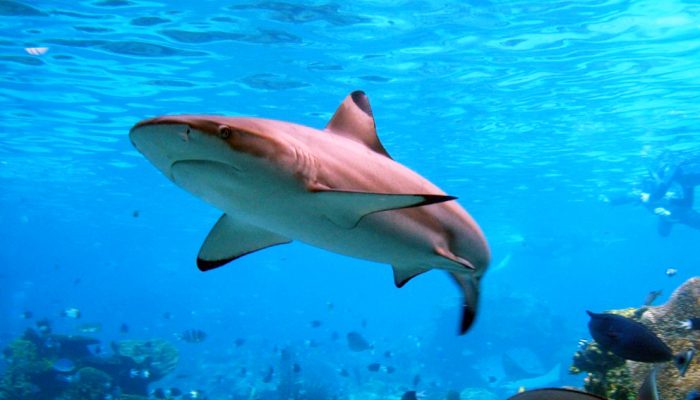 With spring break and summer just around the corner, a lot of us will be going to the beach to soak up the sun and enjoy the warmth. However, when swimming at the beach, I think all of us have had the thought of sharks in the back of our minds. What if this happens? or what if that happens? we might think. I know many of us fear sharks and I used to be one of those people too, until I realized that sharks need to fear us much more than we need to fear them.

On average, humans kill 100 million sharks per year. Most sharks are killed just for their fins for the sake of the shark fin trade. This trade aids in the production of shark fin soup, which is a very popular and expensive dish in China and parts of Asia. When sharks are killed for their fins, the sharks are caught, their fins are cut off and they get thrown back into the water, sinking to the ocean floor and drowning. Many sharks are also killed by unregistered fishing boats and overfishing, and through fish netting; which is a whole different story. Regardless, we kill an absurd amount of sharks per year, while they kill about six people worldwide on average.

The problem with humans killing so many sharks a year, is that sharks are what keep the ocean running properly to put it simply. Sharks also have an extremely low reproduction rate, which is why so many different species are endangered. If we keep killing this many sharks, soon we will have no sharks at all, which will lead to no ocean, which could lead to no us. That is a big problem.

This is only scratching the surface of the importance of shark conservation. I highly recommend that you educate yourselves on what goes on around the world when it comes to overfishing and finning with sharks especially. It is truly sad to see the human impact on the earth so far and how it has been so detrimental in many ways we dont even see. We are doing, and have done, way more harm than good. So, next time you’re at the beach, I encourage you to think about sharks a little differently, and look into what needs to be done in order to help and even spread awareness. Sharks, (who by the way have the right to ‘attack’ us while we are in their domain) do not deserve to be treated the way that they are. We need to do better, and we can do that by getting educated and spreading the word.