The Future of Men’s Club Hockey 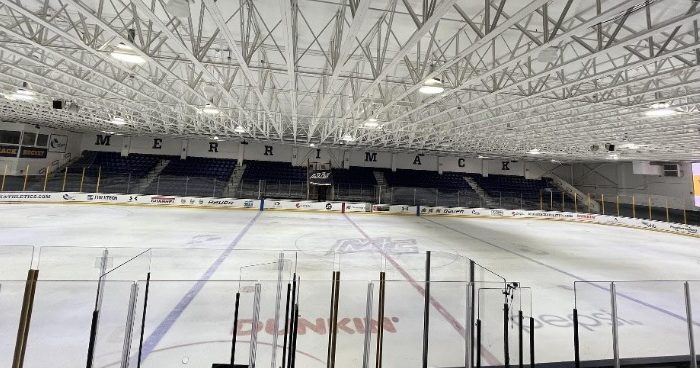 It is no surprise that sophomore Ethan Letendre has hockey in his blood. Growing up a big Bruins fan, he has always had an influence on hockey.

The biggest role model Ethan had growing up was his dad who was a hockey player himself. Watching him play gave Ethan the idea to play as well.

“Before I was even born my family was a hockey family because of my Dad. My dad had the opportunity growing up to play for his town, play pond hockey as that is every kid’s dream to do in the winter time,” said Letendre.

Ethan’s relationship with his dad is important to him because of the impact he had on Ethan.

“One of the big connections that we share is our love for the game. That includes talking about the game, going to college hockey games or Bruins, or simply just watching on TV,” Letendre stated.

Learning how to skate at a young age helped Ethan become a better skater which also made him more comfortable on the ice. Eventually he put all of those skills together and became a hockey player.

Hockey is a way of life for Ethan as he kept playing hockey throughout his youth years.

“Growing up as a hockey family this was my life and I loved it every time I was on that Ice. My U14 team made it to the USA Nationals tournament which is the biggest stage that you can make as a youth player,” Letendre stated.

Ethan also went on about how his team was successful.

“I was able to travel to Canada a couple times which was an amazing experience and one of those times we won the whole thing”.

Another great experience for Ethan was high school hockey. He knew it was important to make the varsity team.

“Making Varsity my freshman year was one of the biggest accomplishments of my life,” Letendre mentioned.

By the time he was college bound hockey was still a passion that Ethan loved so he joined the club team.

“Growing up in Rhode Island has one of the best college hockey programs in the nation,  Providence College Friars, I would go to as many games as possible and dream of one day playing some sort of college hockey,” Letendre noted.

Freshman year was like a “fresh start” Letendre said with a new team, new program, and new teammates. It was time for him to show the new team how good he is.

With limited time on the ice, freshman year did not faze Ethan as he knew he would see more ice time as he got older. Now as a sophomore he has moved up a line and is on the ice a little longer.

“Every time that I am on that Ice if it is in practice or a game I am giving it my all. I want to stay where I am in the fact that I am getting time in every game.”

With no time to waste Ethan got on the ice and played much better than he used to having the mentality to strive for greatness. His teammates also help him become a better player.

The manager of the club hockey team also sees the potential in Ethan ever since he saw him play a year ago.

“From a managerial view, I see a lot of potential with Ethan. He is becoming a better player as the season goes on and he is really fun to watch on the ice,” said manager, Jeff Cote.

Going forward this is great for Ethan as he is constantly improving his game. Knowing that the manager sees good potential in Ethan must be a good feeling.

Once the season is over it is time for Ethan to rest up and get ready for next season.