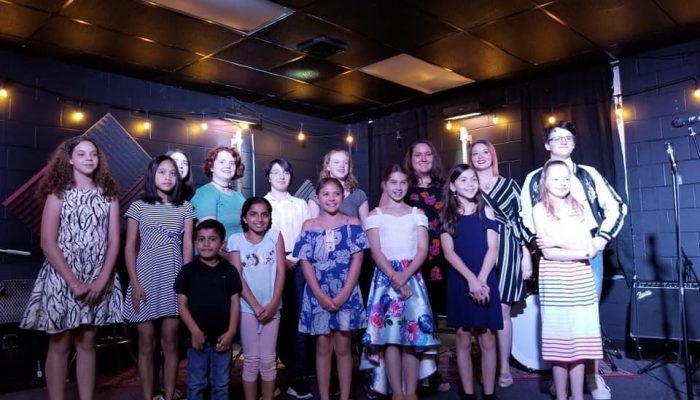 Standing out as a pillar of light during difficult times is the story of a small business being founded on passion, love and community.

The Stoneham community warmly welcomed the establishment of All That Music Academy, which opened its doors in late September.

At the helm of the school is husband and wife team Carl Eisman and Nicole Bradly.

“Nicole and I have both been professional music teachers for some time, and her dream was to own her own school,” says Carl. “She was the initial spark, and in the spirit of marriage and teamwork it became a group effort.”

When the COVID-19 pandemic began, the couple discovered a growing need for music, as community members struggled during the lockdown.

“Music to me has always been my life and my lifeline through whatever I’ve gone through,” Carl explains. “I strive to show other people that possibility.”

Starting with online lessons as the virus raged across the state, the school began its early operations.

“I think what we do was a necessity to a lot of people, and it gave a lot of people who would otherwise be really bummed out something to keep their mind on,” says Carl. “Teaching kept me in a good place too.”

However, Carl and Nicole maintained their vision to establish a physical school.

“We have been doing virtual lessons for a long time […] and turning this virtual business that was cultivated during the pandemic into a physical location was really challenging,” Carl recounts. Difficulties began with “securing the space, setting up the utilities, setting up tons of the business side of things, also transitioning the clientele from virtual environment to in person.”

The founders soon discovered that family and community members stood at the ready to help the school during the crucial transitional period.

“We are pretty lucky that we […] have had tons of people come and help us paint and set stuff up,” says Carl, as he proudly showcases the lobby.

People also showed their support by helping organize the classrooms and sitting area, tending to the couple’s children, decorating, and building a home-made desk to complete the lobby.

All That Music Academy also has the support of members of the Merrimack Community. Carl Eisman is an instructor of guitar at the College.

“I Think he’s going to do a really good job, he’s really good with our age group and he tries to cater to everyone too,” says Kevin Benkart, a former student of Carl’s. “I think he’s a really good teacher”

Other community members, both in the student body and faculty, are patrons of All That Music Academy.

From everything ranging from building the school to its very mission, Carl and Nicole maintain a focus on the community.

“Nicole and I wanted to curate our own kind of experience and curate our own place that we could design to offer the kind of environment that we would like to present to the community,” shares Carl. “Our mission is to create an environment where anybody can feel comfortable coming to, to be a part of this community in Stoneham, and to bring something positive to people’s day, and to encourage people to be creative and positive things that make us feel good.”