Home > Sports > Mac or Bailey? Who Should The Patriots Pursue At The Quarterback Position?

Mac or Bailey? Who Should The Patriots Pursue At The Quarterback Position? 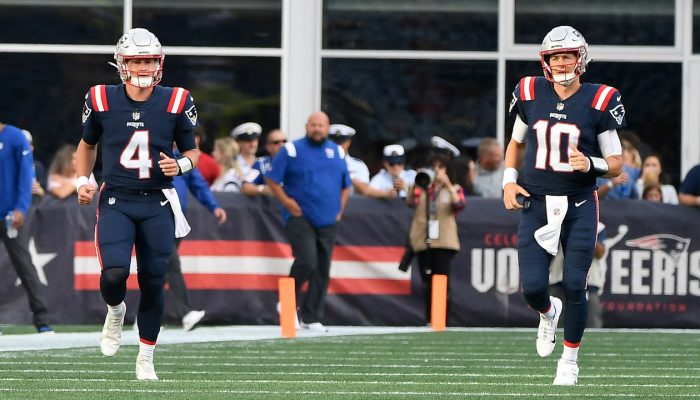 In the Patriots last 3 weeks, there has been a lot of attention drawn at the Quarterback position, due to an unexpected turn of player design. In Week 3 against the Baltimore Ravens, Patriots stater Mac Jones left the field in the last minutes of the 4th quarter with what seemed to be a “significant ankle injury”. Mac was expected to miss multiple weeks under center. When the Patriots were planning to be without Mac for a while, they looked to veteran Brain Hoyer to step in until their franchise guy returned. In the opening minutes of Week 4 against Green Bay, Hoyer left the game quickly with a “possible concussion”. Butterflies were flaring now, as the Patriots and their fans were relying on third string rookie Bailey Zappe to fill in the shoes. The quarterback out of Western Kentucky held his own against the Packers, taking Aaron Rodgers and coach Matt LaFleur to overtime to only lose by a field goal in a 27-24 loss. In Week 5, Zappe got his second start while Hoyer was placed out for the week. He put up a very solid shutout win at home against the Detroit Lions with a 29-0 score, with the help of Matthew Judon and the sensational defense. Zappe’s most recent performance against the Cleveland Browns in Week 6 was the most impressive of all so far, as he put up 309 yards and 2 touchdowns through the air in a 38-15 win on the road. In his 3 starts, Zappe racked up a 72.9 completion percentage and a Quarterback rating at 111.4, which is over a normally great percentage. But how long will Zappe’s heroics last, as his teammate looks to return to the spotlight.

Who Should Take the Shots?

While most Patriots fans would love to see Zappe get more time on the field to prove himself, the thought of Mac Jones being sidelined seems surreal. Mac was organically placed to be the Patriots franchise guy after being drafted out of Alabama in the first round, and the thought of him being replaced could be off putting for the locker room to deal with. But who will Belichick decide? Mac is in the light of returning for Monday Night against the Bears, and Zappe has proven he is very capable of being the guy to get the job done. And as Zappe has looked great, Mac has shown some glimpses of struggles with an interception in every game he’s played leading up to his recent absence. It would be ideal to let the main guy in Jones step back in for the offense, but with an impressive 3 starts for Zappe to build on he could very much be the guy as well. With whatever decision Belichick is to make, either starting candidates is a safe bet.