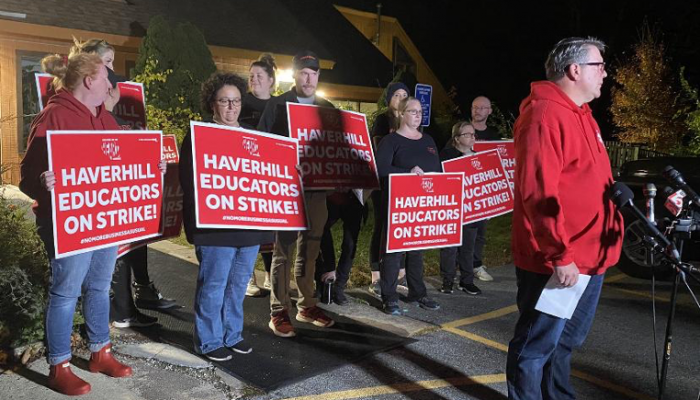 On Monday October 17, 2022, school was anything but in session for thousands of Haverhill, Massachusetts students.

The Haverhill Education Association began a teacher strike which would go on to last four days despite court orders for school employees to return to work. Negotiators from the HEA met with negotiators from the school committee throughout the week, but were unable to reach an agreement until Thursday night.

Haverhill educators have been rallying and advocating for a fair contract since the end of summer, when the school year began without finalization of a contract.

The Haverhill Education Association led by president Tim Briggs asked for a contract which included “fair, professional compensation,” as the average teacher salary in Haverhill sat nearly $10,000 below the Massachusetts average.

In accordance with their Twitter account, the union also advocated for their contract to include safer working conditions and learning environments, smaller class sizes, and improvement in diversity, equity, inclusion, and racial justice within the schools and educators in Haverhill.

Multiple peaceful strikes occurred throughout September and October during off school hours, such as the Work To Rule Rally on September 1st, and the Rolling Rallies on October 15th, which also occurred in Malden.

After the strike was held on Monday, October 17th, the Essex County Superior Court ruled that all teachers participating in the strike must return to work, as Massachusetts state law does not allow public employees to strike. However, Haverhill teachers stood their ground and continued to strike Tuesday, Wednesday, and Thursday.

Negotiations were attempted on Tuesday and Wednesday in hopes to end the strike, but the Haverhill Education Association and the Haverhill school committee were unable to reach an agreement regarding financial proposals and other aspects of the teachers contracts.

In a quote pulled from WCVB, Haverhill school committee member Scott Wood stated “We do believe that the financial proposal that we’ve offered, which would cost the city over $20 million over the next three years, would bring us up to speed on an average salary with similar urban school districts throughout the Commonwealth of Massachusetts,”

However, the Haverhill Education Association did not find this to be a fair proposal, as it still left Haverhill teachers’ salary level below the state average. The HEA also emphasized that they wanted language in their contact that created a safer and healthier learning environment for students and teachers.

Late on the night of Thursday, October 19th, representatives from the Haverhill Education Association and the Haverhill school committee met yet again in hopes to reach a contract agreement. As seen in live video feeds from the HEA Twitter account, hundreds of protesters including parents, students, and residents stood with teachers in their fight for a fair contract.

The determined efforts and solidarity of Haverhill educators paid off, as by 11pm that night, the two groups came to a full tentative agreement. According to the Haverhill Education Association’s Twitter, this contact guaranteed “student safety, closing the wage gap, and recruiting diverse teaching population,”

Additionally, many members of the Haverhill community were happy about the contract agreement for Haverhill public school teachers.

“I am so proud of the teachers, students, parents, and other local communities and unions stepping up to support the Haverhill Public School System,” said Justine Maguire, a resident of Haverhill.

“Our community wouldn’t be anything if it weren’t for our teachers. I was pleased at the end to finally see the school committee, and the teachers come together, hug it out, and meet in the middle. I am happy with the outcome if the teachers are!” She additionally added about the conclusion of the strike.

Haverhill students were back in class on Friday, October 20th, but conversation began as to how the four lost days would be made up. Some options included adding the days on to the end of the year, or getting rid of a school break to make up the days.

“Where it’s only 4 days I’m sure we’ll just roll with it,” said Kristen, a parent to elementary school aged children in Haverhill.

However the days are made up, Haverhill educators persistence and determination created a fair contract which will improve the lives of teachers and students alike.