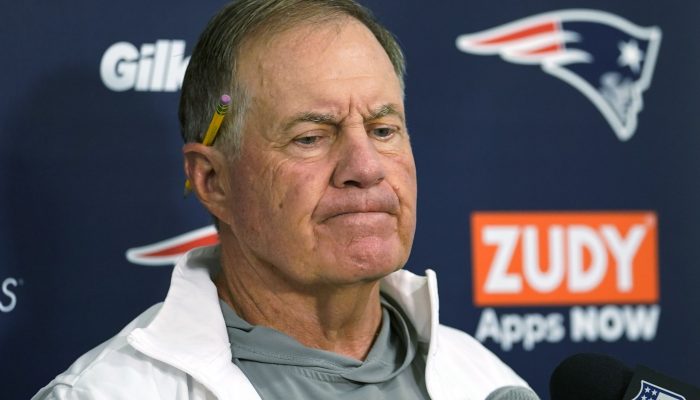 Bill Belichick has built up quite a reputation throughout his career as the greatest coach of all time, with that being said, he should not have the amount of roster and personnel control that he has. Bill Belichick has shown in recent years that he is outdated in his approach to team building.

The list of questionable moves that Belichick has made is growing at a rapid rate. The two third-round tight ends that were taken in the 2020 NFL Draft are no longer on the roster, N’Keal Harry was an uninspiring pick given the receivers that were taken after him in the 2019 NFL Draft. The amount of money Belichick spent in 2021 Free Agency was absolutely mindboggling and it set the team up for failure in future years. After spending big money on two tight ends, only one of them seems to be contributing, despite spending big money on Nelson Agholor and Kendrick Bourne, Jakobi Meyers is the one sticking around and playing the best out of the wide receiver group. They even traded for DeVante Parker and it’s still Jakobi Meyers proving to be the number one. The Paat leatriots have shown a clear inability to assemble a receiving group that is even above average, but that is far from everything.

One of the moves that received a lot of public criticism was the Cole Strange pick in the first round of the 2022 NFL Draft. He’s a very athletic guard, based both off of tape and his 9.95 RAS which is the seventh highest score by a guard prospect since 1997, and was the best guard on the board when the Patriots picked, but was likely a need-based picked. That need was created by trading Shaq Mason, an elite guard, to the Tampa Bay Buccaneers for a fifth-round selection in the 2022 NFL Draft, which was likely done to a tight salary cap situation which is a direct result of Belichick’s desperate spending spree in 2021 Free Agency.

Finally, the one aspect of the Patriots that Bill Belichick is known for, defense, inexplicibly got worse. Belichick let JC Jackson walk in free agency. Based off the deal Jackson signed with the Chargers, he was not asking for market resetting money and there is no reason why the Patriots should not have at least matched the deal Jackson got to go to Los Angeles.

Finally, there’s the absolute mess that is the New England Patriots offense. Belichick let it get to this, he willingly signed up for an offense led by Joe Judge and Matt Patricia, and it just looked lost against the Miami Dolphins. Something needs to be done or Mac Jones is going to be ruined.

Belichick has, and deserves, infinite rope as a coach, but his job as a general manager would have been reason for anyone to get fired. However, the pick of Mac Jones may have saved his roster control responsibilities until the end of time.