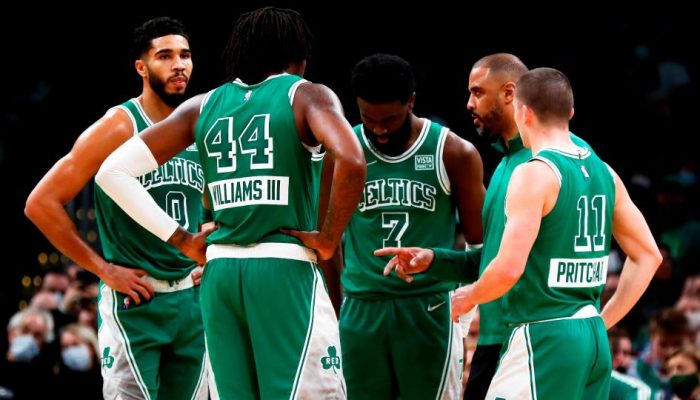 Last Season, the Boston Celtics were two wins away from securing their first NBA Championship since 2008. After cruising through Kevin Durant, Kyrie Irving, and the Brooklyn Nets, and just sneaking past the Milwaukee Bucks and Miami Heat, the Celtics finally met their match against the Golden State Warriors. After a 17-3 run by the Warriors in the last five minutes to win Game 4 in the NBA Finals, the series was practically over. The Warriors dominated Games 5 and 6, which included incredible play from Finals MVP Stephen Curry, and a disruptive Warrior defense that limited the C’s to under 100 points in the final two games. Superstar Jayson Tatum and company were devastated to end such an incredible season on a sour note, but best believe that these Celtics will be competing for the NBA crown once again this season.

For starters, the Celtics have one of the most complete rosters entering the 2022-23 season. It’s hard to imagine this team getting better after making it to the Finals last season, but the addition of former Pacers guard Malcolm Brodgon adds another All-Star caliber player to this team. The core of the Celtics is still intact, with wings Jaylen Brown and Jayson Tatum returning for their age 26 and 25 seasons, respectively. While there were reports of Jaylen being traded to Brooklyn for Kevin Durant, it thankfully didn’t go through. KD is entering his age 34 season and he hasn’t been played a full season since 2019, while Brown has been a consistently great #2 for the Celtics the past few seasons, and is entering his prime. Not to mention, the reigning Defensive Player of the Year Marcus Smart is back, and so is one of the best rim protectors in the NBA today, that being Robert Williams III. A pleasant surprise with this Celtics team is finally having a good bench. Trade deadline acquisition Derrick White looks forward to his first full season in Boston, fan favorite Grant Williams is now a proven corner three point specialist, and Al Horford is still going strong at age 36 after his impressive playoff run last season. The Celtics also signed forward Danilo Gallinari but he tore his ACL while playing basketball overseas this offseason. There have been many rumors about Carmelo Anthony replacing Gallinari, but I’d rather see Boston give Sam Hauser a shot this season instead. Hauser is an absolute sharp shooter, hitting 43.2% of his three pointers in 26 appearances last season; it would be raining threes if Hauser and Payton Pritchard are on the court together.

Head Coach Ime Udoka did an amazing job in his first season coaching the Celtics. Ime definitely changed the culture of this team as he put more emphasis on playing harder and outworking the other teams, which led Boston to having the best defense in the NBA. The C’s defense led the NBA in points allowed (104.5), and defensive rating (106.2), while also ranking near the top in many other categories including opponents second chance points (12.5, 5th), and points in the paint allowed (42.5, 2nd). A lot of credit should also go to the Celtics previous coach and current GM, Brad Stevens. Brad was a great coach in his own right, but he really hasn’t made a bad move as the GM thus far for the Celtics. Stevens is responsible for acquiring players like Al Horford, Derrick White, and of course his latest, Malcolm Brodgon. Despite the sketchy KD-Brown news this offseason, I have full confidence that the front office will continue to make quality moves.

Looking at the competition the Celtics will face this upcoming season, there really aren’t any threatening teams in the Eastern Conference that the Celtics haven’t already overcome. The teams they beat on their way to the Finals didn’t make any moves to make their roster better. The Heat and Bucks were stagnant this offseason, while the Nets look like they’re going to collapse at any moment as Durant requested a trade this offseason, and Kyrie Irving and Ben Simmons always come with some sort of drama. The 76ers duo of Joel Embiid and James Harden could be extremely dangerous, but we’ll see if Harden is finally in it for the long haul and actually performs in the playoffs. A few teams that improved this offseason are the Hawks and Cavaliers, as both teams went out to get star guards, with the Hawks trading for Dejounte Murray, and the Cavs trading for Donovan Mitchell, but the C’s still have the superior overall roster.

The only possible concern I have for this team entering this season is a problem that every team has to face: health. The Celtics have a few players that just aren’t able to play a full season of basketball. The first player that comes to mind is obviously Robert Williams. The Timelord did play a career-high 61 games last season, but he always has problems with his legs, ranging from his knees all the way to his foot/toe. When Rob is healthy, he’s an elite rim protector and massive alley oop threat, maybe limiting his minutes a bit can result in him playing more. Now as I said already, the Brodgon move should work out great for Boston, but Malcolm has had a rich injury history as well. He only played 36 games last season, and he’s only played one full season which was his rookie year back in 2016-17; the most games he’s played since is 64 in 2018-19. Lastly, the elephant in the room must be addressed: Jayson Tatum choked in last year’s Finals. Tatum was having an incredible playoffs until the Warriors shut him down, with the biggest moment being a disappointing 13 point performance in Game 6 with the season on the line. Throughout the playoffs, Tatum had a big turnover problem as well. As all Celtics fans know, Tatum is still young and he’s getting closer to being a NBA Champion every season, he just needs to continue maturing and limiting the mistakes. The fact of the matter is, the Celtics were one of the best teams in the final few months of last year’s regular season, going 28-7 after a 23-24 start, and of course winning the Eastern Conference Championship. If they continue this momentum heading into the 2022-23 season, there’s no doubt in my mind that the Celtics will be back in the Finals, and they might just win it this time.