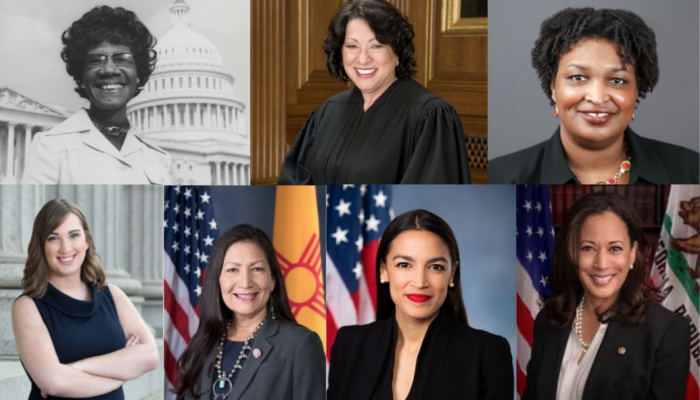 By Shannon Butler-Mokoro and Gabby Womack

March is celebrated as Women’s History Month. It also happens to be the month social workers celebrate Social Work Month. Social workers are all about social justice! And since February is such a short month, we thought we would highlight some women of color who have made and are making herstory, and who have had a lasting impact on the work towards social justice. This week we feature women of color who hold political office or who have been influential in voting rights and politics.

You may have heard that the U.S. elected our first Vice President who is a woman of color: Kamala Harris. V.P. Harris is a South East Asian and Afro Caribbean woman. Her mother, a biologist, was from India, and her father, a Stanford University professor, was from Jamaica. She quotes her mother as telling her, “You may be the first, but you will not be the last.”

Another first in U.S. politics and elected offices is Supreme Court Justice Sonia Sotomayor. She is the first woman of color – a Latina – to be nominated and confirmed to the U.S. Supreme Court. Nominated in 1991 by President George H.W. Bush, Justice Sotomayor was confirmed in 1992 to serve in the U.S. District Court for the Southern District of New York.  She has been a passionate voice for issues related to race, gender, and ethnicity, as is exemplified in her opinion in Schuette v. BAMN.

Alexandria Ocasio-Cortes is a U.S. Congressional Representative from New York’s 14th Congressional District. She was the youngest woman ever elected to Congress, was the youngest member serving in the 116th Congress, and is the youngest woman currently serving in the 117th Congress AOC (as she is affectionately known) is just 1 of 44 Latinx people who currently serve in Congress. AOC has been a vocal advocate for many issues that affect communities of color and people without enough resources. Most recently, she has sponsored or cosponsored legislation related to Climate Equity, Funeral Assistance for those affected by COVID, and the Fair Chance Housing Act of 2018, to name a few.

Debra Haaland represents New Mexico’s 1st District. She is one of two Native Americans to be elected to serve in Congress (Sharice Davis is the other). Rep. Haaland is a registered member of the Pueblo of Laguna.“During her time as State Party Chair, she traveled to Standing Rock to stand side-by-side with the community to protect tribal sovereignty and advocate vital natural resources,” her website states. Rep Haaland is currently being vetted to serve as the  U.S. Secretary of the Interior. This would make her the first Native American woman to serve at a cabinet level position.

Finally, for this week’s profile, we highlight Sarah McBride and Stacey Abrams. McBride is currently the National Press Secretary of the Human Rights Campaign. She is also the first transgender state senator in the country, making her the highest-ranking transgender official in United States history. She is largely credited with the passage of legislation in Delaware banning discrimination on the basis of gender identity in employment, housing, insurance, and public accommodations

Abrams is currently most known for her advocacy on voting rights. She served in Georgia’s House of Representatives and was the Minority Leader from 2011-2017. She ran a high profile campaign to be Governor of Georgia against Georgia Secretary of State Brian Kemp. Her loss in the governor’s race led her to become an activist for ensuring that every eligible voter got out to vote and that every vote cast was accurately counted. Prior to being elected to the GA State House, at the age of 29, Abrams was appointed a Deputy City Attorney for the City of Atlanta. To fight the voter suppression she witnessed during her gubernatorial campaign, Abrams announced in August of 2019 that she founded Fair Fight 2020, an organization to assist Democrats financially and technically to build voter protection teams in 20 states.

Next week we will highlight women leaders of various social movements.

DEI Programs – Merrimack’s Diversity, Equity and Inclusion Initiative sponsors a number of programs throughout the year.

The Truths We Hold by Kamala Harris (E-book)

Our Time Is Now: Power, Purpose, and the Fight for a Fair America by Stacey Abrams (E-book)

Alexandria Ocasio-Cortez on How to Build a Green New Deal

Gabby Womack, M.S., M.A., is a Reference/Access Service Librarian at McQuade Library and a Diversity, Equity, and Inclusion (DEI) Ambassador