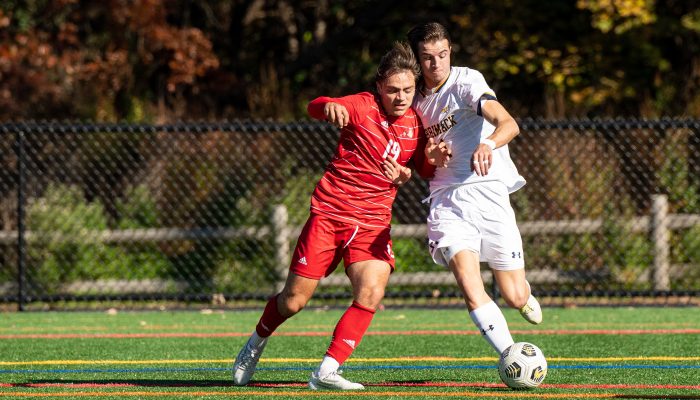 Before Merrimack College’s Men’s Soccer Team went onto the field to play in the 2022 NEC Men’s Soccer Semifinals I had the opportunity to interview Stefano Pesenti, Johan Feilscher, and Juri Schlingmann.

Sean Mahon: What has been your favorite moment from this season so far?

Juri: The win against LIU because at the time they were the best team in the conference. It was a perfect game under the lights and in the rain and we won the game. Also the game against UMASS because it was a turning point in the season. Before the game we were down and after winning we got lots of energy.

Johan: The win against LIU, the trip to Stony Brook, and senior day which was very special this year.

Stefano: I would say the LIU game. I would also say the win against Stonehill because it was the last game of the regular season and we were down 1-0 and it was our chance to get to the playoffs to keep the season alive.

Sean Mahon: Merrimack was one of the two teams who had a bye between the regular season and the semifinals. How has the team used those days in between to prepare for this match?

Juri: Our legs are fresh now. We had the time to recover, if we were to play on Sunday (November 6th) we would have only had 2 or 1 day to prepare so by having this bye week it gave us time to refocus, let the season settle down, and be prepared to go into the playoffs.

Johan: It especially helped us with being well rested which is a huge advantage in the playoffs.

Stefano: It helped us focus in that time and we practiced Saturday, Sunday, and through the week while spending time watching film to prepare. All the guys understand how big this game is for men’s soccer team and the program so we all took it seriously.

Sean Mahon: Last time you played Saint Francis Brooklyn this season the game ended in a tie. Does that change the pressure of tonight’s game or is the team treating it like any other playoff game?

Stefano: This is the first time the program is competing in a DI playoff so there is some pressure compared to playing in the conference but our game plan against Saint Francis Brooklyn hasn’t changed. We know how they play and we know how we play so we have prepared for this game.

Sean Mahon: So Stefano you played for the Warriors since the 2019 season which was their first D1 season. How do you feel the program has grown since then as well as you personally as a player?

Stefano: I feel that in 2019 we were a really good team. We won the conference because we had a lot of players who were very mature. I think it was a good starting point for my college career and the DI program. A lot happened between 2019 from Covid to other things. Lots of things changed, some things were good and some bad but from that point the program has grown and I’ve grown. I’ve been nominated captain by my teammates and it makes me proud. We are getting to the point where people across the country are getting to know the team. I am happy to have been part of it.

Sean Mahon: Juri with this being your first year with the Warriors as a senior how has the transition been from Missouri Valley College to Merrimack? And what do you feel your role on the team is. Is it more leading or are you more of a player that can be counted on to get things done?

Juri: The transition to Merrimack was very easy thanks to all the older players and everyone that’s here. It’s been an easy transition because I moved in with Johan and another teammate from Germany where I am from. From the start I tried to see how the team focuses but through the season I tried to take more of a leading role because I played 3 years of college before and know how it’s done. I really like it here and it was definitely the right decision for me. I want to thank all my teammates for taking me in and making the transition easily.

Sean Mahon: Johan, coming from a DII school to DI Merrimack between your Sophomore and Junior year, how has the transition been and has the playing level differed that much?

Johan: Everything is different here. I came from Concordia College in Bronxville, New York which was bought by Iona College in 2021. I decided I wanted to go to Merrimack before I found out the school was closing because I wanted to play at the DI level. I am glad I made that decision because the campus is bigger, the facilities are so much better, the team is better and the division is also better. The transition wasn’t that hard playing wise. I injured my midfoot during the summer of that year so that made it hard but I came back halfway through last season and was still able to perform. Coach makes sure he recruits players that provide a great environment for other players. It is a healthy environment teamwise and we know we can rely on each other which makes coming here from anywhere easily.

Sean Mahon: With all you guys being foreign exchange students how does soccer compare in America to Italy and Germany?

Everyone: It is similar to soccer in Europe to a certain point. There are so many different things especially in the US where we play multiple days each week from August to November compared to Europe which is from August to May with one game a week. The clock goes down in the US compared to Europe where the clock goes up. In Europe we would be playing Men’s soccer which includes older guys. In the US college soccer is basically under 23 and in Europe you would play with guys who are 30 or 35 years old with families. The only older guys you might find in college are graduate students. With us being seniors and grad students in America which seems older, we would be considered amateurs if we played in Europe.

Sean Mahon: Based on your experience and success in college soccer what piece of advice would you give to younger soccer players and your underclassman teammates?

Juri: Keep working. During my first year I didn’t get a lot of minutes so I had to keep working. Sometimes you have to make sacrifices like not going out late every night and going to bed early some nights if you want to play. If you do that, wait for your chance and it will come. Also time flies by so make sure you enjoy your time playing.

Johan: It is not easy. You have to sacrifice a lot growing up with practices and games on weekends but if it is something you really want to do and achieve you have to be professional about it and give 100% in practice. Take it seriously but also don’t forget to enjoy it. Being on the field with my teammates, running fast, shooting the ball, slide tackling gives me so much joy.

Stefano: In the US after college most guys don’t have a lot of chances to play soccer so soccer wise give 100% when you step on the field because it is a big reason why people play in college any why I chose Merrimack to play soccer. You can have fun but when you are in season you have to stay focused. You will still have time in the spring and the summer.