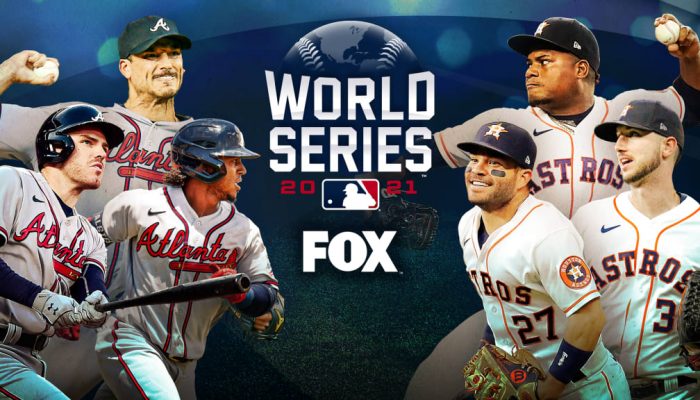 It has all come down to this, the Atlanta Braves will be taking on the Houston Astros in the 2021 World Series. These two teams battled their way through their respective leagues to reach the biggest stage in Major League Baseball. This will be the 21st straight year without a repeat champion which shows that in the MLB there isn’t one team that has been dominating.

Coming out of the National League is the Atlanta Braves who made the World Series for the first time since 1999. The Braves have been without All-Star Outfielder Ronald Acuna Jr. since July 10th, but the young bats of the Braves battled their way to the World Series. The Braves have been 4th in National League on base percentage, second in slugging percentages, and third in runs scored. This team has been coming up with clutch hits all postseason. Just recently Eddie Rosario launched a go-ahead 3 run home run in game 6 of the National League Champion Series to put the game out of reach for the Los Angeles Dodgers. This team looks to keep their bats hot against the Astros pitching staff. On the pitching side, Atlanta was the seventh best with an earned run average of 3.84. These young arms have shown out in big situations during this run to the World Series. Will the Braves have what it takes to capture the crown and party like they did in 1995?

Coming out of the American League is the Houston Astros. There is little to no surprise that the Astros have made their way back to the World Series. This has been a crazy turnaround for this organization, for the years 2006 through 2014 the team had missed the playoffs. Since then the Astros have been in the playoffs for the past 6 out of 7 years. Back in 2017 was the first time in franchise history that the Astros won the World Series. But, it did come back with a lot of controversy. Major League Baseball revealed that the Astros in 2017 were part of a cheating scandal which consisted of sign stealing and players in the dugout tipping hitters on what the opposing pitcher was throwing. Since then the Astros have fallen short losing the World Series in 2019 and losing in the ALCS in 2020’s shortened 60 game COVID season. None the less the Astros have bounced back in a big way. Leading the way is power bat Yordan Alvarez who is coming off a monster series against the Boston Red Sox’s. Batting .522 with a home run and 6 RBI’s, the pitching of the Red Soxs was no match for Alvarez. This seasoned Astros team with multiple players with playoff experience look to cool off the hot bats of the Atlanta Braves.

This best-of-seven championship will look to renew the rivalry between the Astros and the Braves dating back to 1997-2005 where the teams met five times in the National League Division Series, before the Astros moving over to the Atlantic League. This is the 117th edition of the World Series and it is surely going to be a battle.

Game One of the World Series begins on Tuesday, October 26th with first pitch at 8:09pm on FOX. Charlie Morton will take the mound in game one for the Atlanta Braves. While Framber Valdez takes the mound for the Houston Astros.