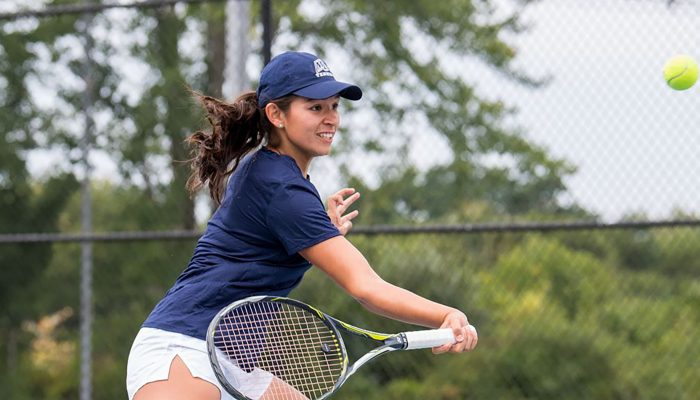 The Women’s Tennis team already brought home two victories after traveling to New Jersey to play Monmouth University and then Mount St. Mary’s in Maryland the following day. The women’s team stepped onto the court determined to prove they are ready to take on D1 opponents.

The team ended their last season undefeated, and is continuing the streak so far this season.

“I have eight, really great athletes. I feel like they bring a lot to the table,” said Dena Madden, who is in her fourth season as head coach at Merrimack. “Joining Merrimack in the fall of 2018, number one singles player, Kristina Calistro has made quite the impact on the tennis team,” Madden added.

Calistro helped kick off the season with two wins, not even dropping a set in her first ever Division I conference matches. She is also among the “Athletes of the Week,”which is when Merrimack chooses one man and woman who showed an outstanding performance out of all the sports teams.

“D1 motivates me to work harder, push myself harder. I walk onto the court thinking that I’m going to win every match, no matter who I’m playing,” Calistro said. “Our team is super close, and we are all really supportive of each other. We lift each other up when we need to, so our energy is really positive on the court.”

The team will be traveling to Orlando, FL, this upcoming spring break from March 10 to 13 to take on Dickinson College, University of Sioux Falls, and Kenyon College.

Their next and only home match of the spring season will be on March 22 against Saint Thomas Aquinas College.