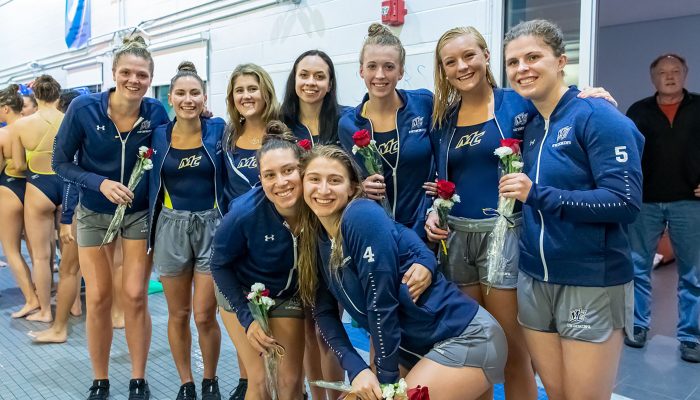 The Women’s Swim team has struggled to make a name for themselves ever since their debut in 2013, with only four people holding the team together.

Fast forward a few years to 2016 and the swim team has their first ever recruited class of 11 freshmen. These freshmen are fast. They all swim different events and bring huge depth to a team that once had only 4 people.

Now in 20202, we are only a few months out from graduation and losing the fastest recruiting class the swim team has ever had. These seniors have carried their team to their best win record to date. As well as a handful of them receiving the ‘Fuddruckers Athlete of the Week’ award, and for some of them, more than once.

“These seniors have been with me since the beginning almost. I recruited them the year after I started coaching this team and it has been incredible seeing them grow as people and swimmers,” said head coach Erin Cammann. “Many fast swims are expected, but this will be a big opportunity for the team to prove themselves in this new conference and the last time for the seniors to compete to the best of their ability before retirement.”

Although the team will lose some of the fastest swimmers they have ever had, the team is expected to have a strong incoming freshmen class.

The recruited class from last year is already strong, but the program is continuing to grow with this Division I transition.

So far there are three girls committed to swim next season. Gabby Saffer from Pennsylvania, a strong breaststroker, which is vital for this team who will be losing three breaststrokers the end of this season; Jenna Durgin from Massachusetts, who can swim any event she is put into but is strongest in the freestyle and individual medley; and finally, Kayla Stone who is also from Massachusetts and another very strong breaststroker.  “I am so fired up for these incoming freshmen that have committed so far. They are adding so much depth and speed to our program and I hope future recruits will see that and it will build the team even more in the years to come,” Cammann said.