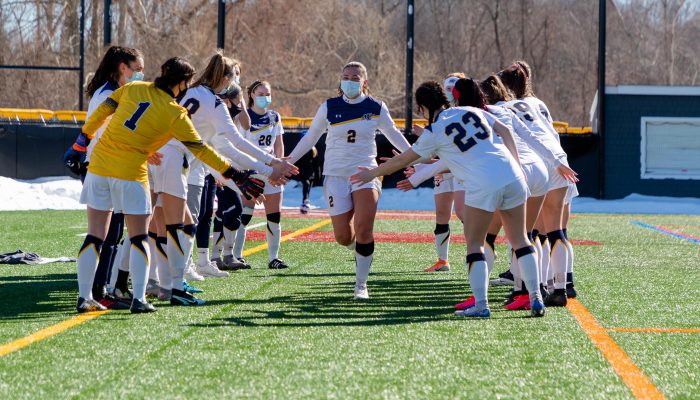 Women’s soccer defeated Mount St. Mary’s on March 9 by a score of 2-0. Seniors Nicole Langlois and Bridget Austin found the back of the net one time each. Langlois scored in the first minute of action, connecting on a corner kick from Rebecca Harty.

“Having a goal so early in the game sets a great foundation for the rest of it,” said Nicole Langlois. “It motivated us to keep working hard and made us more hungry for another goal. Spirits were up and we were determined to keep that lead.”

“We started off very energized with the objective of leaving it all on the field,” said Bridget Austin. “Our heart is our best team attribute.”

“When we got the call for the corner kick I had a good feeling about it because the team’s energy was already so high,” said Nicole Langlois about her game-opening goal. “I knew if I timed my run correctly I could get there.”

The Warriors kept their momentum going into the second half with midfielder Bridget Austin scoring in the 77th minute, firing the pass from Molly Murnane into the top right corner of the cage.

“It was a perfectly placed ball played in by Molly for me to run in on,” said Austin about her rifling strike to blow the game wide open. “As a team we’ve been talking a lot about our speed of play and how more opportunities will open up if we do things one touch sooner.”

Goalkeeper Megan Langlois was a brick wall between the pipes for the Warriors, tallying four saves en route to her second shutout of the season.

“As a keeper it’s vital to stay focused and ready at all times during the game.” she said about her lights-out performance. “I would say my preparation was the contributing factor.”

The two goal lead provided a cushion for Megan Langlois and the Warrior defense. “It increased my level of confidence because the second goal helped cement our win,” added the goalkeeper. “I was more confident in my team and that made me want to get a shut out even more, which pushed me to make those last two saves in the closing minutes of the game.”

Their next match is a home game against Wagner on March 16. It will be streamed live on NEC Front Row. Game time is set for 3:00 pm at Martone-Mejail Field.