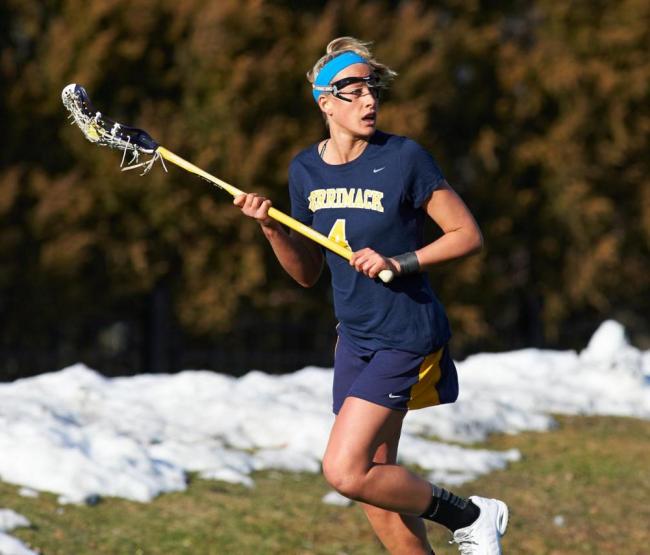 The Merrimack Women’s Lacrosse team opened their 2014 season at home last Sunday toping the University of Findlay 16-15 (3OT). Sophomore Danielle Riley (West Point, N.Y.) scored the game-winning goal with 2:13 left in the third overtime. With the win, Michael Daly picked up his first career win as the head coach for the Warriors.

The Warriors were lead by sophomore Aubrie Stouffer (Souderton, PA) who finished the game with 3 goals and 9 points. Kayla Breton (Windham, N.H.) and Riley also added 3 goals a piece in the victory. The Warriors had six players score at least 2 goals, showing they have a balanced attack.

Senior Goalkeeper Inna Hedden (Woodbine, MD) racked up 12 saves with 8 saves coming in the first half. Hedden made a number of key saves in overtime to help preserve the win for the Warriors.

Coach Daly has high expectations for this year’s team as they aim for an appearance in the Northeast-10 Conference championship game after finishing 5-11 last season. The Warriors are returning 11 players from last year, including 2 senior class members. With a young squad, the Warriors will rely on the leadership of tri-captains Hedden, Stouffer, and Guilia Palombo (Sandwich, MA) to make a run for the playoffs.

Inna Hedden will return to the Warriors’ lineup after starting 13 games last season with 166 saves for a .420 save percentage and a 14.91 GAA (Goals Against Average) including a season high 16 saves against Rollins. Stouffer is another key returner who posted 13 goals and 3 assists last season. Senior Dara Hayes (Calgary, Alberta) also returns as the workhorse for the Warriors’ midfield unit. There are high expectations for Hayes after tallying 2 goals, picked up 24 groundballs and had 14 caused turnovers.

There are also some new additions to the team that will play an immediate role this season. Freshman Claire Blomberg (Wading River, N.Y.) is expected to start on defense. While freshmen Megan Fero (East Manlius, N.Y.) and Jordan Sullivan (Malden, MA) will have an instant impact on the attack. Brittany Sullivan (Norwood, MA) and Michela Salvucci (Newton, MA) will also look to earn minutes for the Warriors.

At midfield, newcomers Charlotte Fitzgerald (Sudbury, MA) and Meghan Wiseman (Arlington, MA) hope to make an impact off the bench at the midfield position. They will be accompanied by veterans Christine Keenan (Byfield, MA) and Danielle Riley who were major contributors off the bench last season.