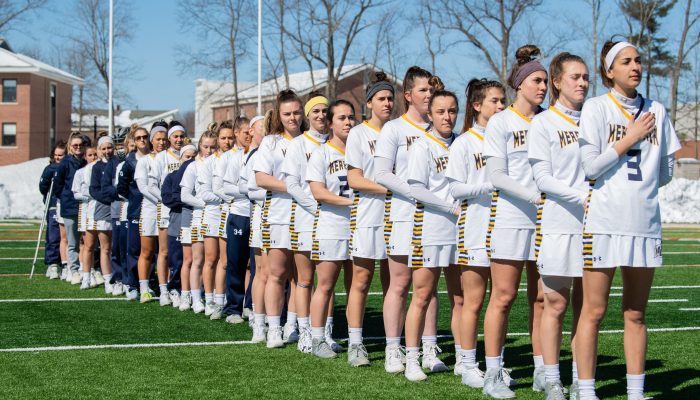 Coming into their final season in the Northeast-10 conference, the Merrimack Women’s Lacrosse team looks to leave Division II with a bang. After losing a combined 45 points between Annette Ruggiero and Carly McKenna, the Warriors were doubted by the rest of the league. Little did they know, Merrimack’s offense was returning five key players.

“I think that having almost all the offensive players returning will be extremely helpful but we always try to raise the bar and with every season we try and build on the successes of last year and improve any weaknesses that we saw,” said Amber Feminella, the team’s senior co-captain. “Having everyone on the same page is extremely helpful for that and gives us a head start on fixing our weaknesses.”

This year’s team has a lot to live up to considering last year’s team set the school record for wins in Merrimack history.

“We plan on continuing that success by working even harder this year and proving to ourselves that we earned our success last year. Now that we know how it feels to have a winning season, we’ve come back to this season with a hunger to get that feeling back and be even more successful than we’ve ever been,” senior co-captain Bridget Schofield said. “I think the newcomers see how we work hard and have a lot of fun and they buy in because they want to, not because we force them to.”

Communication is key when it comes to building a successful program. The success will always start at the front line which is the captains.

“By communicating as much as we can. We’ve been friends for the past four years which makes it easy to openly talk about anything and we all support each other,” said co-captain Teagan Mockus.

This right here is the sign of a good team with even better leadership. This is part of the reason fans should be all in on this team.

Merrimack is fighting for their last ever NE-10 and with the move to Division I next year, will not be able to compete in the playoffs for four years.

“I think our intensity has grown every year since starting here at Merrimack. We have a lot to prove in this division right now and we’re all up for the challenge,” said captain Erin Blomberg.

The team has an incredibly solid defense. Mockus is probably one of the fastest defenders there is right now. She can bring the ball up and go coast to coast on anyone with strictly just her speed. There is also Danielle Schweitzer and Courtney Capobianco holding down the middle of the defense. Capobianco played a huge role against against No. 11 ranked Pace, taking two or three charges. Schweitzer recorded a yellow card in that game because a member on the other team stepped up to their Merrimack’s goaltender. Finally, anchor Lauren Trepaney is out there making saves like the good old Tim Thomas. But she couldn’t be making saves as easy as she does without Kelsey Daly flying around on the back end harassing every shot the opponents could possibly take. This defense, if they stay hot, could take the Warriors on a deep ride into the playoffs.

The offense is just as solid as the defense. When all of a team’s attacks and mids can score, the team is in a great situation. Feminella, Schofield, Ally DaCosta, and Haley Bartlett are the core four goal scorers and will combine for 250 goals or more this season.

An upcoming game against the Le Moyne Dolphins will be at Duane stadium on Apr. 13 at 12:00 p.m.