What’s Up With Mendel Pond? 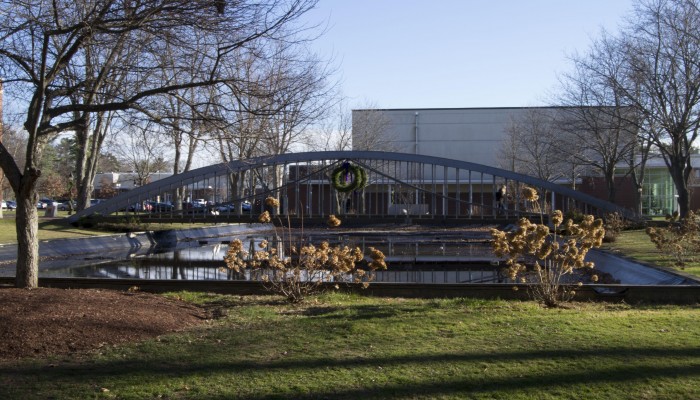 With a beautiful view, water fountains, and the Moseley Bridge, the pond right outside Mendel Center has always been both a historical and scenic landmark on campus.

This year, the appearance of the pond has taken a turn for the worse.

At the beginning of the school year, students and faculty were concerned about the fish being left to swim in a pond where the water gets too low. But now, they are concerned about fixing up the pond and possibly making it into an organic garden.

Merrimack’s Green Team recently made a proposal for the switchover.

Madison Davis, a student at Merrimack and president of the Green Team, said that the student group recently met with President Christopher Hopey.

“We advocated for a garden on campus and Hopey said that he has the funds to do so,” Davis stated. Their plan includes a fence of bushes or foliage to prevent passersby from seeing the garden when nothing is growing.

Davis also went on to explain that she met with Merrimack’s S.G.A. to talk over the issue.

“If SGA demonstrates that the school population does not want the garden there, that could be a topic of conversation to bring up to Hopey, but otherwise they do not have a voting capacity on this issue since the funds are allocated for the sole purpose of the garden through an outside party. President Hopey brought Green Team into this since we brought up the garden and he wants the pond fixed,” she stated.

When asked about the pond, Anthony Preston, president of S.G.A., expressed that they are still discussing future possibilities.

Ultimately, the lining in the pond is damaged and most students are in agreement that a decision in its fixing needs to be made.

Jim Chiavelli, associate vice-president for communications said, “The president wants to hear from a diversity of voices on the future of Mendel Pond. Some have proposed a garden, some urge the rebuilding of the pond.”

Currently, both administration and the Green Team are welcoming of ideas surrounding Mendel Pond.