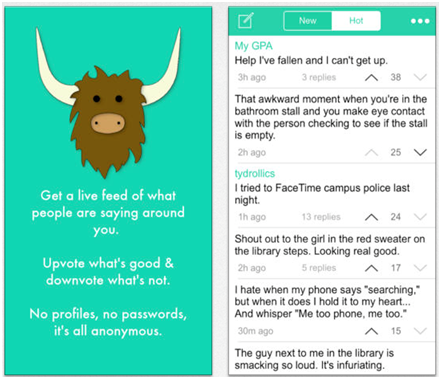 New social media app or new way to hide behind your phone and say what you wouldn’t say to someone in person? Yes, I am talking about the campus wide popular app known as Yik Yak, which has been a recent Merrimack phenomenon. This app was created with the intent to be about news, funny experiences, shout outs, and jokes, but who really thought it would just stay to that? The app lets you see the most recent posts from other users in a 10-mile radius based off of your current location. The “Yaks” are anonymous, which makes it that much easier to say what you have always wanted to say about your roommate’s bad odor without them knowing it was from you. It allows anyone and everyone to connect and share information without having to know who they are, and with the ability to up vote and down vote comments, you can see if the community agrees or disagrees. Having many positive votes can create the potential for that comment to get on the “Hot List”, while too many negative votes will result in the comment getting deleted.

As one could assume, Yik Yak has turned into being used for more hurtful, graphic, and demeaning comments rather than for fun and jokes. A few public schools and colleges all over the US have already blocked the application due to its negative and rather harsh comments. The entire city of Chicago was blocked from using the app, the Rhode Island school district, Norwich University, Westlake High School in Texas, as well as countless other educational institutions across the states.

According to Monican’s resident director Joan Kwiatek, “Yik Yak can be a great tool to be positive and create great morale here at Merrimack College by sharing compliments or thanking friends and employees at our institution”. She also goes on to say “the comments I have seen are not an accurate representation of our Merrimack student population”.

When asked if the app could be used in a positive way, senior Bridget McAnulty replied “Although I love the idea of that, I unfortunately don’t think the app would be as much of a success due to the society we live in today”. So I am asking all of you, why does our entertainment have to be at the expense of hurting others? According to Kwiatek “We, as a community, need to do better. We are better than Yik Yak.” Just remember, even though it’s anonymous, everything we do on social media can always be traced back to you. It’s up to you Merrimack, do you want to let this app negatively define us?