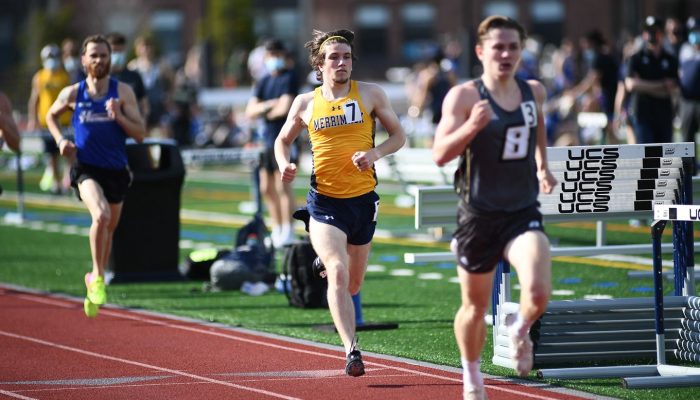 This past weekend, Merrimack hosted the Merrimack Invitational track meet at Duane Stadium, giving track and field the opportunity to compete this year. Merrimack athletes dominated the day, with both the men’s and women’s track and field teams placing first out of the four teams participating. The men’s team ended with a point total of 177 while the women’s team ended with a total of 193.

The four teams that attended the Merrimack Invitational were UMass Lowell, Bryant, Assumption, and Merrimack. The day was full of Merrimack athletes coming in first place across different events like Aaron Gable winning the 110m hurdles, Patrick Redmond winning shot put with a 14.62m throw, and Eseosa Omuemu winning the triple jump competition with a jump of 13.70m. The women’s team also had a good amount of first place finishes such as Kaleigh Lane winning the 400m race with a time of 1:00.51, Alana Johnson winning javelin with a throw of 41.58m, Sam LiPetri winning the 800m race, and Taylor Jax winning the hammer competition with a throw of 43.15m.

Overall, Merrimack College had a great day being able to host and compete in track and field for the first time all year and definitely has a promising future for the program over the next few years.