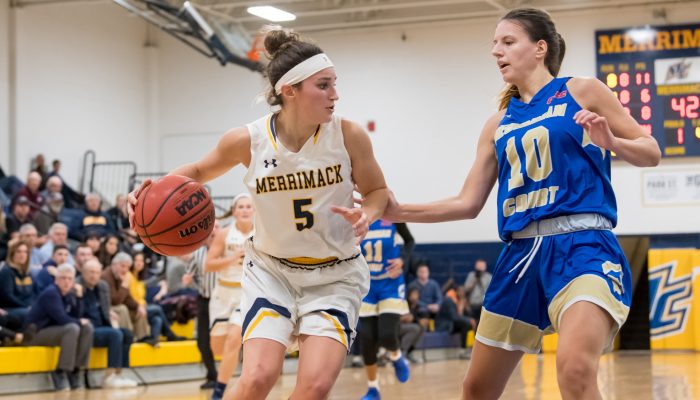 Lindsay Werner is a Senior on the Merrimack Women’s Basketball team. She is from Groton, Massachusetts and has previously played on the Groton-Dunstable regional High School. She is averaging 16.7 pts, 2.3 reb, shooting 42.9 % from the field and 39.0 % from three. Lindsay is a Sports Medicine major. She is possible looking into playing in a European League.

Growing up you do AAU and circuit teams. I guess it became a reality more in high school and I  wanted to pursue it. It was a passion of mine I definitely had a lot of coaches push me towards it and said you can do it.

How does this team compare to others you have been on?

This team is definitely unique, this is a unique year because it is me and some of my teammates senior year. So you have that emotion too, also with the huge D1 transition its our last year in the NE10. It’s a good group of girls who work really hard and all have a main goal of pushing it to the end.

There’s been a couple of frustrating moments, if you lose a big game or ups and downs in the season, I can’t think of one specifically. It’s a marathon during a year and their are definitely frustrating moments, like we said before this team does a good job of pushing through.

I wanna stay in athletics whether it’s coaching or other positions in athletics. There’s a lot of overseas leagues that a lot of girls go and play in. I think i’m going to look into that, but I want to stay in it with coaching and doing stuff with kids, just keeping involved.

Did you receive any information on these Euro Leagues?

As seniors we get a lot of information on euro basketball leagues and then our coaches have a bunch of connections. Some of my past coaches and trainers have a lot of connections too. If you want to get into it, you have to get right into it after season. We have ten days left and i’m trying to just focus on those.