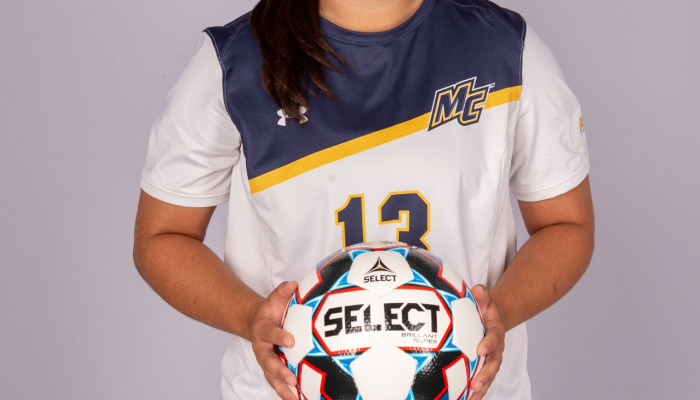 How did you first get involved with soccer?

I started playing when I was around three years old in the town YMCA leagues. I don’t remember this, but my mom tells me that in the beginning I would sit down on the field with my arms crossed and pout, “They keep taking the ball away from me!” Luckily, I grew out of that phase and fell in love with the game. My dad and I would wake up on Saturday mornings in the fall and watch Liverpool FC in the English Premier League (EPL), and I think that’s when I not only started to enjoy soccer but became obsessed with it. I grew up playing for my town travel team, as well as for a club soccer and high school team. Each team I played for helped me develop as a player and a person, all while having the time of my life with some of my best friends.

When did you start to think you could play soccer in college?

I remember watching the documentary “Dare to Dream” about the iconic 1999 Women’s World Cup team. I think every collegiate female soccer player can attest to the inspiration that this team provided us. Growing up, I never thought I could be a professional player, but as I continued to improve as a player, I knew I wanted to continue playing at a high level of competition while making new friends and memories with a team.

It is truly a privilege to be a part of this year’s team. The competitive spirit of this group makes everybody work as hard as they can to be a better player each day. Additionally, this team is extremely positive. The transition to Division 1 has been challenging, but we have remained positive and are using everything as a learning experience and a way to get better. Overall, this is the closest team I have ever been on. I am so blessed to spend every day with my best friends. Walking onto the field, I know the girls next to me have my back, and I will have theirs in return.

What’s the most frustrating thing that has happened in your soccer career?

The most frustrating thing that has happened in my soccer years was probably adjusting to the level of college soccer. Coming into preseason my freshman year, I was not prepared physically, so I did not see the field as much as I had hoped. I knew I was a good player, but my fitness was nowhere near where it needed to be. After that season, I knew what I had to do in order to be successful, and I kept that frustration from freshman year with me all summer during my workouts; I used it as fuel to come into my second preseason as a whole different player, ready to tackle Division 1.

The best piece of advice I have been given is “if you can believe it, you can achieve it.” I feel like the mental aspect of sports is often overlooked. While being fast and strong is a huge part of being successful, you have to have confidence in your abilities in order to use them to your advantage. Your body is controlled by your mind, so if your mindset is not positive, you won’t be able to perform to your best ability.

Is there anything you think about while you’re practicing or in a game?

I kind of zone out when I’m playing. Soccer has evolved into a form of therapy, serving as a distraction from all the other noise in the world. Being able to just get out on the field and not have to think about anything else going on in life makes me feel free.

What are your plans for soccer after college?

I hope to keep playing in summer leagues or play pickup because I don’t see my love for the game going away anytime soon. I could definitely see myself coaching in the future. I want to share my love for the game and help younger players develop a passion for it. Growing up, I mainly had male coaches, so it would be great to coach young girls and serve as a role model for them.