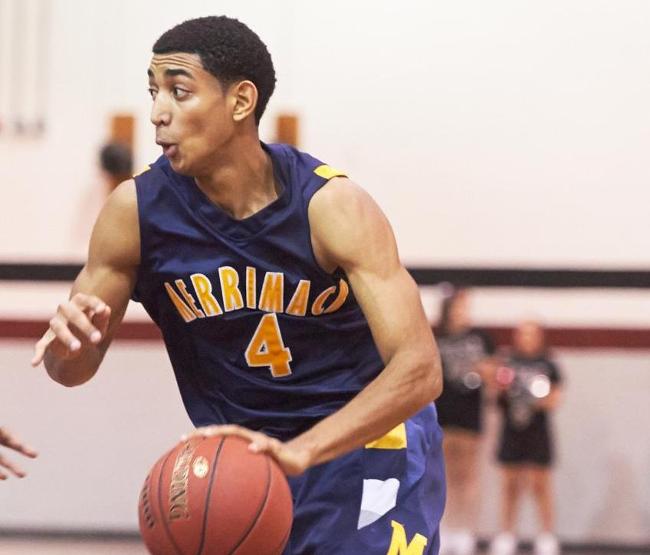 Gelvis Solano (New York, N.Y.) is a sophomore guard for the Merrimack Men’s Basketball team. Solano has started in all 20 of Warrior’s games this season averaging 21.6 points per game.

Solano has scored 30 or more points in 5 contests this season. He is shooting 40.5% from the field and 31.6% from behind the arch. So far this season he has racked up 431 points, making him the leading scorer for the Warriors through the first 20 games.

As a freshman, Solano was second on the team in scoring after averaging 13.8 points per game. He also was ranked second in the conference for steals (50). Solano scored over 20 points on 7 different occasions and was named to the All-Conference Northeast-10 All Rookie Team.

Q: If you could pick 4 NBA players (current or retired) to play on your team for a pickup game who would you choose?

A: Four players that I would love to have on my team would be Michael Jordan, Kobe Bryant, Shaquille O’Neal and Bill Russell.

Q: Who is your favorite team in the NBA?

A: Favorite team in the NBA is the L.A. Lakers

Q: Who is your favorite athlete of all time?

A: Favorite athlete of all time is Kobe Bryant.

Q: What is your most memorable experience from your basketball career?

A: My most memorable experience in my basketball career was going to the final four in high school. It was the first time the school had ever went to the final four. Everyone doubted us, said we were overrated and we weren’t going to go anywhere. We lost to the eventual champs by 7.

Q: Where do you see yourself in 5 years?

A: In five years I see myself playing professional basketball. If not in the NBA then somewhere overseas.

Q: What is your favorite type of basketball shoes?

A: My favorite type of basketball shoes to play in are the 2012 Nike Hyperdunks.

Q: If you could change places with any celebrity for a day who would it be? Why?

A: If I could change places with any celebrity it would probably be Kobe Bryant. He’s extremely rich and he’s known everywhere. I think It’d be pretty cool to get recognized everywhere you go.

A: In high school I always wore the number 4. It was one of the few numbers that was available and I felt comfortable with it.  I’ve stayed with it since then.

A: Michael Jordan over LeBron James.

Q: What other colleges were recruiting you? What made you choose Merrimack?

I chose Merrimack because it felt like a second home when I came on my visit. I also knew that I would have the opportunity to play right away and the conference (Northeast-10) in which Merrimack plays in is one of the top conferences in the country.