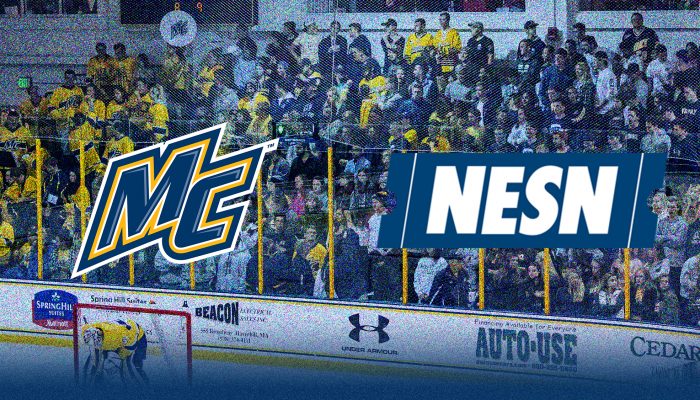 Recently the Merrimack College hockey team received news that New England Sports Network (NESN) will broadcast three of their games this season. This is great news because over the last couple of seasons the men’s ice hockey team has made tremendous strides in becoming one of the best teams in Hockey East and now will be able to broadcast that on a major network in New England.

They have played in many memorable games such as a thrilling victory over BC last season to go along with intense playoff series’ over the last two seasons. The team has competed fiercely in two consecutive playoff series against the University of New Hampshire. Although they lost both of these series’, they were extremely competitive with both series’ going the full three games.

​These nationally televised games will give people who may not normally get the chance to watch Merrimack hockey a chance to see the Warriors in action. The dates for these games have not yet been announced but when they are, people will have the chance to witness how the Warriors hockey team.

An interesting fact about Lawler Rink is even though Merrimack has one of the smallest rinks in major college hockey, teams that have come here over the years have said that Lawler rink is one of the toughest arenas in college hockey to play in. As a visiting player, it is difficult because of the smaller dimensions of the ice and also because the students section is directly behind the opposing goalie and they can hear everything that is being said by the students.

Merrimack sometimes gets overlooked because we are such as small school and we don’t really get the television exposure that schools like Boston College and Boston University. This new contract with NESN is going to be exciting for people who don’t usually get to watch the Warriors play because they will get to witness the exciting fast paced style of hockey that is played in North Andover.