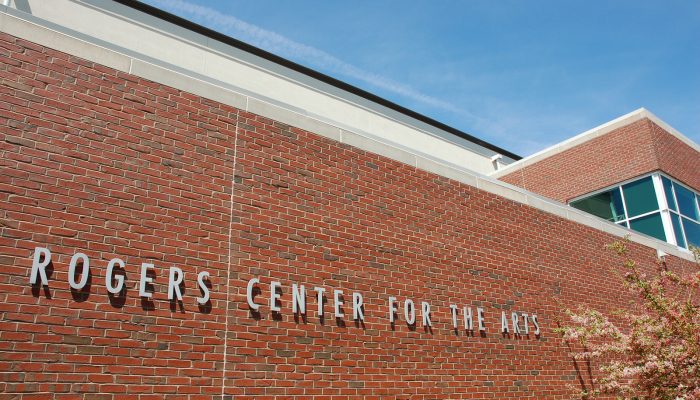 The OnStagers Dramatic Society of Merrimack College is producing the play “All in the Timing” at the Rogers Center for the Arts from Nov. 15 through 17. Written by David Ives, the show consists of six 10-minute comedic plays. “All in the Timing” is student-produced by the OnStagers’ six member executive board. These students are in charge of everything from publicity to hiring the design team for their productions. This is the first show at Merrimack to be directed by adjunct professor in Theatre Brianne Beatrice.

Beatrice says her vision for the production “explores communication and time.” This show will contradict opinions of people who think that theatre is slow or boring. “This production will have a fast paced/city feel,” adds Beatrice, so it will surely keep the audience’s attention.

Beatrice has loved her time directing her first show at Merrimack. For her, the experience “has been a real treat. The students are incredibly driven, talented and focused. I am lucky to have a fantastic cast,” she says.

The cast includes 13 Merrimack students. Allison O’Brien and Emily Burke, both Merrimack juniors, each play a character in one of the ten minute plays. There’s no linear storyline between any of the plays, so they say working on this production has been a unique experience.

“The way in which it’s written is so specific, yet the objectives of each character is up for interpretation. I think this contrast allows for us as actors to get the chance to explore what David Ives wanted to get across to the audience when he wrote this piece,” O’Brien says.

Burke adds, “working on the show has been fun but also very challenging.” Her vignette is particularly tricky because the characters don’t speak plain English, so she’s working hard to memorize her lines. You’ll have to see the show to find out what language she has to speak.

O’Brien and Burke are also both members of the OnStagers’ student executive board. They get to see behind the scenes as producers as well as perform on stage, so they know this show inside and out. They say this show will be a treat for audiences. Burke describes the show as “hilarious,” and says that this production has “something in there for everyone. It’s going to be a really fun night for everyone.”

O’Brien says the main theme of the show is living in the present, and this theme connects each vignette together. “Everyone is so caught up in the daily grind and rarely stops to take a breath and think about what their purpose is and what they are living for. I think it’s an important lesson to be seen played out on stage,” O’Brien explains.

Working with Beatrice as director for the first time at Merrimack has been invaluable for O’Brien and Burke. Not only has Beatrice worked with students to improve their performing craft, but she’s given them new life lessons as well.

“[Beatrice] has taught me that if at any time I find myself stuck or confused in a show or in life, take a moment to remember what you’re doing and why you’re doing it,” says O’Brien. “She has allowed me to take a step back and look at things more clearly.”

Adds Burke, “I feel like I can always rely on [Beatrice] to support me during rehearsals and work with us to make sure the show is the best it can be.”

Get your tickets to this fantastic show now by visiting or calling the Rogers Center box office at 978-837-5355. First 100 Merrimack students to each performance are free!