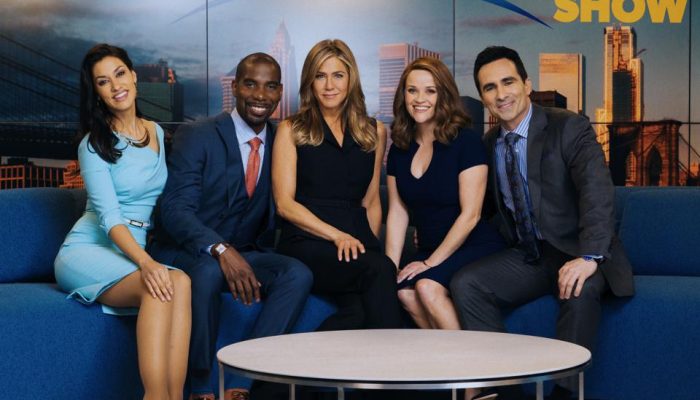 Apple TV+’s new show, The Morning Show, stars Jennifer Aniston, Reese Witherspoon, and Steve Carell, three television and film titans. The show takes a direct look into a modern workplace at one of America’s most beloved television morning shows. Although “The Morning Show” is fictional, the story it tells is far too real.

The Morning Show deals directly with the #Metoo movement, which is a major social movement against sexual violence and misconduct. The movement provides a safe place and encourages victims of sexual misconduct to come out and share their experiences. The hashtag “Me Too” was first used by Tarana Burke who survived sexual harassment and became an activist striving to encourage victims and put an end to sexual harassment. Like other social movements, the #Metoo movement intends to break the silence of women who feel shame or experience stigma after being affected by sexual harassment.

The gist of The Morning Show is that Steve Carell’s character gets fired from the network for sexual misconduct, and producers for the show search for a new co-host to take his spot. During the series premiere Kessler’s co-host, Alex Levy, played by Jennifer Aniston announced that her colleague was let go for sexual misconduct allegations. The top New York City television station replaced Kessler with a spunky, hotheaded journalist as the new co-host. This is when Reese Witherspoon’s character, Bradley Jackson, comes into play. Jackson is very curious about the allegations against her predecessor and begins unconventionally looking for answers. The journalist in her begins to uncover many secrets that were buried by the network at its core. While uncovering these secrets Jackson discovered that the network was covering up Kessler’s behaviors and sought out this boy’s club at American’s highly successful and beloved morning show. Jackson gathered a rogue team including the news division boss, Cory Ellison, played by Billy Crudup, and The Morning Show’s executive producer, Chip Black, played by Mark Duplass. This ragtag group wants to effect change at the network by pursuing the story of Kessler’s inappropriate relationship with a young woman, Hannah Shoenfeld.

Like many other shows, The Morning Show sparked meaningful conversations about the abuses of power happening in toxic workplace environments. The series got a lot of attention for its unconventional depiction of the #Metoo movement. The drama not only examines the emotions of the victim and their assailant, but also the impact on their colleagues and friends. While watching the series, you gain insight into what the victim, Hannah Shoenfeld, played by Gugu Mbatha-Raw internally thinks, as well as the assaulter, Mitch Kessler. Also, the show looks into these less detectable storylines of what’s come to light with #MeToo. The show raises questions about power dynamics demonstrated by higher-up men and the women who work for them. At the series’ core, we see how deeply important the #MeToo movement is. The movement has empowered women to come forward and identify their abusers.

According to The Conversation, The show goes into sexual misconduct, power imbalances, and sexual inequalities that have been prominent in the television and film industry in recent years. There is a clear parallel between Steve Carell’s character, Mitch Kessler, and NBC’s former Today Show co-host Matt Lauer. Lauer was fired from NBC’s morning show Today in 2017 over allegations of inappropriate sexual behavior in the workplace. Similar to Lauer, Kessler shared his morning show with a female co-host and that co-host had to share the news of the allegations live. Another memorable comparison between the two can be seen in the third episode of the series. In one scene the audience can see Kessler has a secret button underneath his work desk which closes the door from inside. Matt Lauer was known to have a similar button to close women inside.

After airing, The Morning Show earned great reviews and became a popular subject of discussion. Steve Carell and Jennifer Aniston were both nominated for the 2020 Emmy awards for outstanding lead actor and lead actress in a drama series.