Home > Entertainment > Series Review: Everyone Should Experience “Schitt’s Creek” At Least Once

Series Review: Everyone Should Experience “Schitt’s Creek” At Least Once 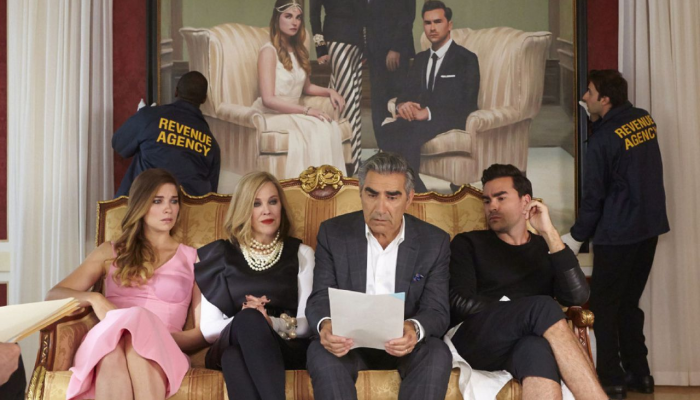 The ultra wealthy Rose family abruplty lost all of their earnings and home, and has nowhere else to go but a rural town called Schitt’s Creek, which the family purchased as a joke years back. David Rose, in Season 1 Episode 1, describes the town as “a vomit-soaked dump,” but he eventually grows to love it. What is it that makes this modern utopia, that prioritizes acceptance over division, relationships over class, and happiness over money, so popular?

“Our show at its core is about the transformational effects of love and acceptance and that is something that we need more of now than we’ve ever needed before,” Dan Levy said after Schitt’s Creek won Outstanding Comedy Series at the 72nd Primetime Emmy Awards.

Schitt’s Creek is a parable for the good life. For the LGBQT+ community, this means normalizing all relationships. In Season 1 Episode 10, “Honeymoon,” there’s a standout scene taking place when David talks with the motel clerk, Stevie, about his sexuality by using a wine analogy. David can be identified as pansexual, after being with a female to then seeing Patrick who identifies as a gay man. This relationship was meaningful beyond the show, “It’s so rare to find a show with healthy LGBTQ representation,” a fan shared. In Schitt’s Creek, the relationship is nothing less than normal. It’s a natural portrayal of love between people who do not live in a world of prejudice. This reveals the stigma behind sexual orientation within television. Fans are engaged with Schitt’s Creek despite the characters’ appearances, dialogue, and actions being constructed in a way that isn’t relatable. When fans relate to a character, they become invested, which can bring a television series to life.

Season 5 Episode 11, “Meet the Parents,” influenced so many to self-reflect after watching Patrick come out to his parents that he was gay. Audiences saw the fear he had experienced and related to it. Fans strongly identified with David and Patrick after watching their relationship. Fans felt influenced to come out and shared what it was like on twitter, tagging the show actors. It was heartwarming knowing the honesty and vulnerability that was felt after those found strength and encouragement from watching. Here’s what one LGBTQ+ fan had to say. Schitt’s Creek has helped connect with this community during what has been for some of them the hardest times, many not being sure what they would have done without them.

In addition to illustrating how life could be if we accepted each other for who we are, Schitts Creek touches upon class and division. As mentioned earlier David, describes the town as “a vomit-soaked dump,” but that’s what makes Schitt’s Creek an effective example for being an ideal society. The writer created this series based on our world, where materialistic items like wealth, possessions, and status are valued more than we admit. In Season 1 Episode 1, the Rose family had a rude awakening when they first arrived at Schitt’s Creek. Their first interaction with the Mayor Roland involved him interrupting Johnny, the Rose family’s father by saying “Let’s get you all squared away in the office, the gals can grab the bags,” Moira, Johnny’s wife replies by saying “Apparently in hell, there’s no bellman.” This set the tone for the division of classes, which was noticeable through the dialect, appearance, and facial expressions. The humor and heart of the show is the contrast of the ultrawealthy Roses and the townspeople. In the pilot of the sixth and final season, audiences noticed how the characters’ circumstances ended up changing their value system. They like who they have become, better than before.
Despite the show not being based on a true story, it was inspired by real things. Schitt’s Creek fosters a sense of realism with the acting, costuming, and set design, making visual representations of what society could be. Schitt’s Creek lived up to its “Happy Ending” title, by delivering a positive message about humanity, sexual orientation, and the positive of riches to rags.