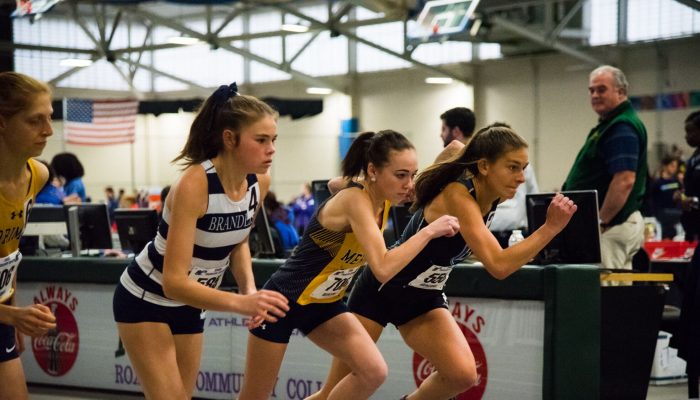 Its an exciting time of year here at Merrimack College because all of the winter sports are getting underway. One of the unsung winter teams about to get underway is the track and field team.

They had a very successful season last year, especially in the individual events. Several seniors won championships to cap off some very successful collegiate careers. One name that comes to mind when talking about finishing her college career on a strong note is Carly Mascaro. Carly was a senior last year and was one of the most dominant female athletes in the history of Merrimack athletics.

Although Carly has since graduated and moved on from Merrimack Track and Field, her legacy and accomplishments will not be forgotten for many years to come.

On Saturday, December 2, the track season officially got underway at Umass Boston. In that invitational, the top performers in men’s events were Senior Keith Steinbrecher who won the 5000 meter with a personal record of 15:10.22 while his classmate Christian Gentile finished third in this event just over 11 seconds behind. Junior Jacob Robinson won the 200 meter with a time of 22.32 seconds breaking the record held by former Warrior Taylor Jean Gilles. On the women’s side the top performers in the meet were surprisingly all freshman. Leading the way was freshman Calene Lazare, who made her collegiate debut and won the 60 meter dash. She also finished second in the two hundred meter event with a time of 25.94.

This year the track and field teams have a lot of experienced upperclassmen  as well as a lot of freshman and sophomore runners which make the team’s gel together. Having a mix of both young and experienced runners also shows that Merrimack track and field is in a great place because over the next couple years the runners who are freshman now can gain the experience that can help the team to win both the indoor and outdoor NCAA championships in the near future. As for this year, I am excited to see what the young freshman on the track teams can bring to the table in their first seasons.

The thing that  I find interesting about the way the two seasons are set up is that even though the track and field seasons consist of a winter and spring season, there are two NCAA championships at the end of both. Because of this, even if one of the teams do not compete up to expectations in the winter season. there is really no time to sulk over the results because the season essentially does not end until the end of the school year. That is why for the track and field athletes my recommendation for you is to keep competing at the highest level possible until the very end of the season because at the end of the season you have a good chance to represent the entire Merrimack college community at the NCAA track championships in May.