Series Review: “To Your Eternity” 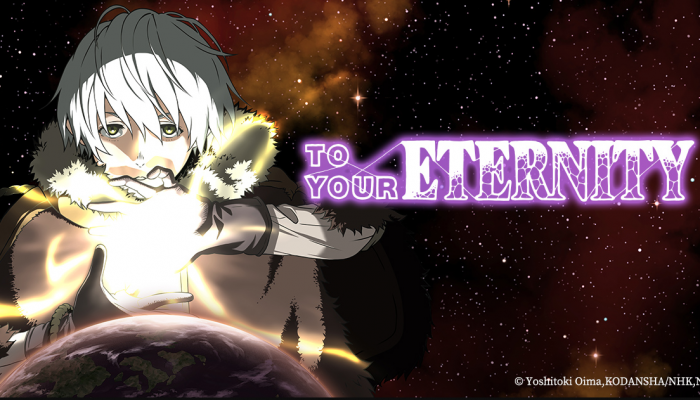 In Spring and Summer 2021, a 20 episode television anime titled ‘To Your Eternity’ aired. The series has been licensed for streaming in the US by Crunchyroll. A second season has been approved, and is tentatively planned for the Fall of 2022.

The story, if I had to summarize in one word, is: amazing. You will cry during this anime. The plot is about an orb cast down by this mysterious shadowy figure that takes the shape of anything that makes an impact on it. At first, it takes the shape of moss, then a wolf, and then, a human. The person or object cannot be alive for the orb, named ‘Fushi’, to take its shape. It is an interesting concept, and one that is thoroughly explored throughout the first season. Later on, to add to the mystery, Fushi has to start battling ‘Knockers’; mysterious shapeshifting monsters that steal his memories. The mystery aspect of this anime is what kept me glued to my TV screen as I kept watching the next episode while losing track of time. What is the goal of the Knockers? How is Fushi going to find a way out of this one?

The art and animation itself was alright. I can definitely say that the show looked good throughout, but some episodes certainly looked better than others. The first episode seems to be particularly well done in terms of animation. The animation is good where it counts as well, like in big action scenes and highly emotional moments. The animation is certainly better than average, but not amazing. The real praise lies with the background art. The landscape of this show’s world looks picturesque and is amazing. It makes me want to live there.

The music was not especially magnificent, but it served its purpose well, especially during the emotional scenes. The opening theme was performed by Utada Hikaru, who’s notable previous works consist of the themes for the Kingdom Hearts video game franchise and the Rebuild of Evangelion anime movies. Their single, “Pink Blood”,  served as the opening theme for “To Your Eternity”. It served the themes of the anime well and was a great addition to the soundtrack.

“To Your Eternity” is shaping up to be one of the best anime of 2021 so far, and maybe even of the past couple of years. I rarely give this score, but I think it really deserves a 9/10. The story was just so good, and it kept me interested throughout the entirety of the 20 episode run. I certainly hope the show continues to provide ample entertainment throughout the second season when it comes out next year.