Home > Entertainment > “The Vagina Monologues” are Coming to Merrimack

“The Vagina Monologues” are Coming to Merrimack 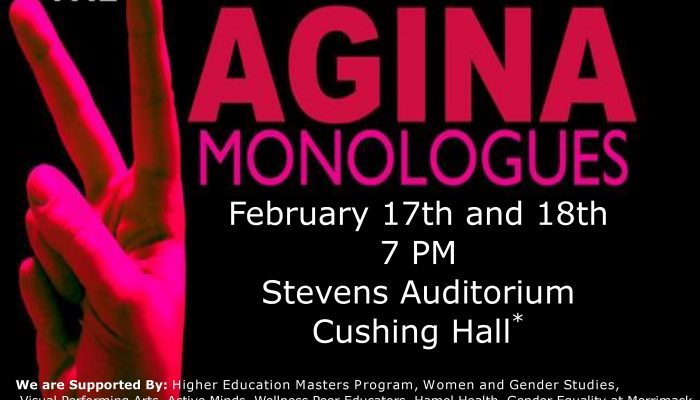 Eve Ensler’s play “The Vagina Monologues” has arrived at Merrimack. Thanks to graduate student Jill Kelley, the Monologues will be performed this Friday and Saturday evening as part of her capstone project.

The Monologues were first performed off-broadway in 1996 after Eve Ensler conducted interviews with over 200 women about their private parts. Her goal was to collect different stories from these women and share them, and in doing so, remove the taboo associated with female anatomy. The voices range from a six year old girl, a Bosnian sexual assault survivor, a seventy-year-old woman, middle-aged women, to Eve Ensler herself as she witnesses the birth of her granddaughter.

The play has been performed in many different formats by many different people, and has been edited and updated through the years. Notably, in 2004, the first all-transgender performance of the Monologues was held, performed to celebrate the introduction of a new piece about the experience of transgender women.

Since its first performance, the Monologues have been about celebrating femininity, but in recent years the focus has changed to spreading awareness about violence against women. They are performed almost exclusively during the month of February to coincide with Valentine’s Day (Feb. 14) which advocates for women’s rights. Here at Merrimack, the cast of the Monologues hopes to continue the work of the show in breaking down barriers, and making room for similar—perhaps bigger—things to come.

“The Vagina Monologues” will be performed Friday, Feb. 17 and 18 at 7:00p.m. in Stevens Auditorium, located in the basement of Cushing Hall.