The Truth Behind Royal Crest 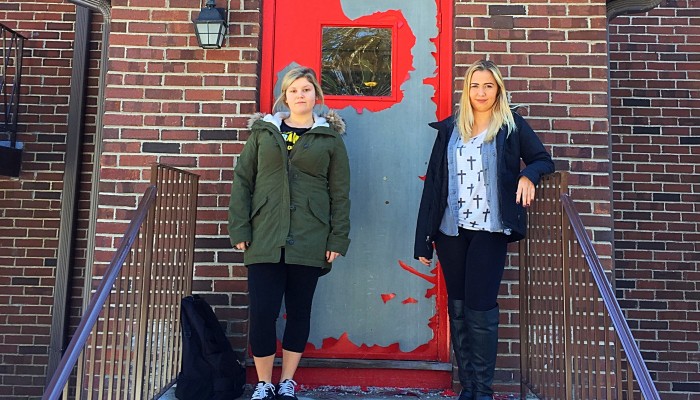 Merrimack’s campus has been steadily growing for the last few years, including the number of students wanting to live on campus. In attempt to continue offering the students on-campus housing, Merrimack added a housing option in Royal Crest Apartments, located across Route 114.

While some enjoy the quiet life across the street, others have found issues with different rules and mandates that come with living next door to families and non-college students.

According to the Office of Residence Life, there are 90 beds in combination of four- and six- person apartments that are leased by the college. These apartments were intended to “… primarily house upper class students in an independent living environment,” as stated on Merrimack’s Campus Life – Housing page.

With additional amenities such as the pool area, the clubhouse, and community gym access at Royal Crest, it appears to be a sweet deal. However, students that live at Royal Crest have a different opinion depending on what they look for in housing, particularly when it comes to quiet hours, the meal plan, and parking on campus.

On campus, quiet and courtesy hours are from 11 p.m. to 8 a.m. Sunday through Thursday. Minimum quiet hours on Friday and Saturday are from 1 a.m. to 8 a.m. “During quiet hours, any noise must be kept at a level such that it cannot be heard by neighboring residents,” states Merrimack’s student handbook.

Merrimack’s quiet hours are different than Royal Crest’s. According to Chief Michael DelGreco of the MCPD, Merrimack only leases a few apartments in a complex of non-college owned property where families and other renters live. Therefore, quiet hours must differ at Royal Crest and are called courtesy hours, which start at 10 p.m., seven days a week.

Merrimack senior, Heba Mohamed, enjoys living at Royal Crest because she gets to be close to campus without the craziness of living on campus. She has had some issues with the rules there, though.

“I don’t have to hear shouting or banging in the middle of the night. If I knew it would be like this, I would have asked to be placed there a while ago,” said Mohamed.

According to the Office of Residence Life, students were informed about community expectations through Residence life as well through the Royal Crest Leasing Office prior to moving there. Students are held accountable for any policy violations through the Merrimack College student conduct process, just like other resident students.

Mohamed, who lives at Royal Crest through Merrimack, expressed that it was made clear what she was and was not allowed to do, but still feels that some of the rules are unfair.

This year, Mohamed was written up for having a candle in her apartment at Royal Crest. She expressed her annoyance with this because she highly doubts that her neighbors, whom are normal residents, are not allowed to have candles in their apartment.

Ashley Walsh, a senior at Merrimack, said she was in no way made aware of the different policies over at Royal Crest. In fact, she was bombarded with a list of rules specifically for Royal Crest, after receiving a noise complaint on a Sunday night while watching a movie with her friends.

Charlene Sullivan, also a senior, just came back from studying abroad in Australia and was given Royal Crest as the only option if she wanted to live with Walsh, one of her friends who also studied abroad. The two moved in Jan. 21 for the start of their last semester at Merrimack College.

After living there for only four days, the room already had two noise complaints. When a resident adviser at Royal Crest came to inform them, they said they were in shock because it was a Sunday night at 10:45 p.m. and they were watching a comedy movie with some friends.

“Wish Merrimack gave me an orange jumpsuit when I signed the contract to live here,” said Sullivan in response to hearing all the rule differences at Royal Crest versus living on-campus at Merrimack. “On campus, you are surrounded by your peers. A majority of the time, you have similar schedules and can enjoy the late night hours.”

At Royal Crest, the noise complaint process is handled differently. “If the Royal Crest (resident advisor) has an issue in a Merrimack College-supplied apartment, we are called and respond. If a non-student has an issue, they call 911 and North Andover Police has a list of Merrimack College leased apartments and call us to respond if it one of our apartments involved. We are invited into their jurisdiction at that point,” said DelGreco.

There is more than just one rule change for students over at Royal Crest to adapt to. Aside from the difference in quiet hours, there are issues with parking on campus as well.

Walsh went to get a parking sticker as a commuter (as she lives in Royal Crest.) She was unpleasantly surprised when she got to the police department and was told she could not receive a parking pass because technically she was considered a resident student. This meant she could have her car over at Royal Crest, but it was not allowed on Merrimack’s campus because there is a shuttle provided for Merrimack students housed at Royal Crest.

According to Beth Solomon at the Office of Residence Life, “Students are able to have their car at Royal Crest without going through the parking lottery system.”

There is a shuttle schedule available online as well as at the shuttle stops printed out both on main campus as well as Royal Crest. Merrimack’s decision to do this was based on the limited amount of parking available on campus.

This became very inconvenient for Walsh who works two jobs off campus and had to change her work hours due to how the shuttle runs. In the past, Walsh has worked jobs off campus to help pay for college and this was never an issue until she began living across the street, away from her classes, her room, and her car.

“I can’t exactly roll out of bed to get to class, I need to leave 25 minutes before class to walk to the shuttle and get to Merrimack in time for my classes,” said Walsh.

Students living over at Royal Crest through Merrimack are also required to hold a five-meal plan for the dining hall, despite having access to a full kitchen in their apartments, including a dishwasher.

While this is convenient for students at Merrimack, it costs $900 to have this meal plan. Not all students have a back-to-back schedule, especially upperclassmen.

Due to the location of the additional housing that Merrimack provides through Royal Crest, there is a disconnect from their peers. Meeting up with friends to go to the Den, the gym, the library, or even grabbing coffee used to be so simple because all the residence halls were within walking distance to everything else.

Sullivan, a business major with a large amount of group projects, said “Living here has become a hassle because other students don’t like to travel to Royal Crest to meet up to work on projects, and the shuttle runs less often at night.”

When selecting housing for the upcoming fall 2016 semester, consider the differences at Royal Crest Apartments through Merrimack and the on-campus housing.