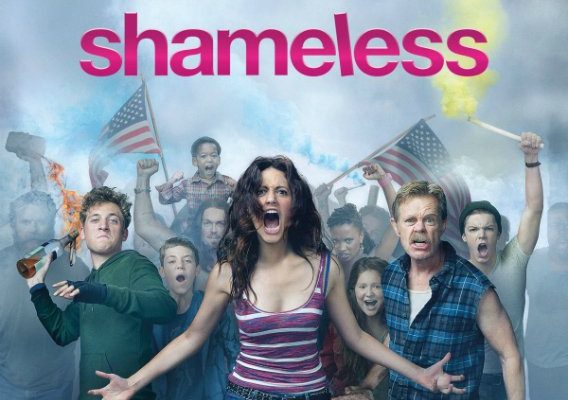 Shameless really turns its back on every television stereotype by following an alcoholic father, a bipolar mother and son, a gay teenage boy, a black sibling in a white family, and the list goes on. Its gritty realism often makes you forget that you’re watching a television show. With 11 seasons, Shameless holds its audience’s attention through drama, comedy and pure and utter chaos. Instead of showing us a picture perfect, desirable family that so many comedy-drama shows aim for, we get every sad and dirty detail of a struggling family from the South Side of Chicago.

The majority of past television shows have a heavy focus around families of a higher class and just caricatures of working class people. However, more recently there has been a spike in the popularity of shows like Shameless that feature a family of a lower class in a realistic way that makes the viewer feel empathy for them. These kinds of shows offer a way to understand people’s situations and just how difficult they can be.

The Gallagher family is nothing like the average American family we often see on television because of TV’s history of more often showcasing the wealthy. They depict what it’s like to do whatever you need to just to survive and keep your family together. None of them hold a consistent job; however, they all are expected to find some source of income by the age of 9. They often pay the bills by stealing, lying or scamming their way into money. They are drunks, liars, cheaters and mental illness runs in the family. Yet all you want is for them to come out on top because you see every dark aspect of their lives. Fiona is the eldest sister and she began raising her 5 siblings at the age of 9. They have been in and out of foster homes their entire lives but always end up back together no thanks to their dysfunctional parents, Frank and Monica.

The grittiness of Shameless makes it difficult to look away. The show uses this intense, drama-filled family to pull you in. Even with all of the things the Gallaghers do wrong like steal, cheat, fight, sell drugs, and do drugs, viewers still find themselves always rooting for them. I can’t count the number of scenes where one of the kids is losing their shit on Frank and I went silent and couldn’t take my eyes off the screen. Emmy Rossum and Jeremy Allen White, who play Fiona and Lip, put on incredibly convincing performances of anger and sadness. It’s almost impossible not to cry along with them each time they find themselves letting loose on their absentee mother or father.

There are positive and happy moments of the show that also contribute to the realistic nature of Shameless. Whenever any of them are hurt, the entire family along with their closest friends are there. When something good happens to one of them, they all celebrate like every time one of them gets out of prison. These little moments are the ones that make you root for them even with every terrible thing they do. They might be getting home from jail, but you get to see them happy and having fun for a short amount of time.

Apart from the drama of the show, the creators also use more technical aspects of television to make Shameless feel real. For example, much of the earlier seasons don’t use a lot of music in the background. Conversations are raw as all you hear are the characters voices, which is how conversations happen in real life. The house that the Gallagher family lives in is also made to feel like a real home. Even in the opening scene of the first episode as we follow Fiona walking around the house you see her cleaning up as she goes. There is stuff everywhere just as you would expect in a house of 6 kids. The characters also don’t look picture perfect. They dress in cheap, average looking clothes like t-shirts and jeans most of the time. Even in the first episode, Fiona is wearing a fancy dress, but tries to keep the tag on because she needs to return it the next day.

The appearance of the sets and characters along with the lack of fancy editing and the dramatic storylines create a very realistic depiction of a big family living on the South Side of Chicago. Every moment of Shameless pulls you into their world. It makes you step back and appreciate what you have as you watch these characters struggle to survive. Shameless wouldn’t work without its intense sense of reality and the amazing actors that pull through on creating this realness.