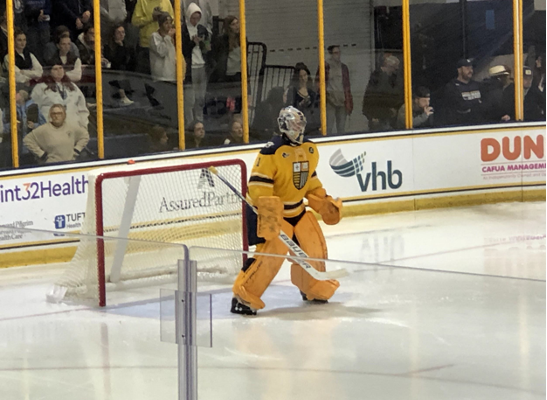 Merrimack’s hockey is a Division 1 team. With the new division, comes players worthy of that moniker. Enter Hugo Ollas, the starting goalie for the Merrimack Warriors’ Men’s Hockey Team. A player that had been drafted by the New York Rangers, a professional hockey team.

The sophomore at Merrimack has certainly made a name for himself among students, whether that is because he’s a Swede that stands a towering 6 foot 8 inches, or because he is Merrimack’s iron door of a goalie.

In his first season with the Merrimack Warriors, Ollas recorded over 400 saves in the 18 games he played in the 2021-2022 season.

At just 18 years old, he was drafted by the New York Rangers, a team with the National Hockey League (NHL), a North American professional hockey league. He was chosen during the 2020 NHL Entry Draft. Squeezing in on the seventh, and last, round of the draft, Ollas was chosen 197th overall.

Gordon (Gordie) Clark, former Boston Bruins player, and now former Director of Player Personnel for the New York Rangers, got to see Hugo play firsthand before he was drafted.

“I got to see one of the games he played and had my Swedish scout tape his practices,” said Clark when talking about the then 17-year old goaltender.

The coach at Ollas’ Swedish team would not play Hugo, opting to put him on the bench instead of showcasing his talent, according to Clark. And there was plenty of his talent on display at Linkoping, especially for a goalie as tall and as big as Ollas.

Hugo “was not playing much in Linkoping, Sweden Junior team but I had never seen a 6’8” goalie move so fast – down and up, post to post , great glove hand at 17 yrs old,” remarked Clark.

Ollas ended up at Merrimack College after being scouted. Since then, he has been on the fast track to climbing the ranks of the Division 1 college hockey world.

“My son was my New England scout and got his name out to college coaches,” said Clark, “he took over the # 1 spot last year.”

“The game’s a lot quicker here, cause there’s more rink,” Ollas said, “but I think it’s more fun to play here,” even though there has been a transition to more skilled play than in Sweden.

When asked about being drafted to New York, Ollas said, “it was a huge blessing because I’ve always liked the Rangers and it’s awesome to be a part of the organization.”

He is just like everyone else on the Merrimack ice hockey team. His schedule is the same as his teammates, and he practices and listens to the coaches just as anyone else does. The only real

difference is that he is often in talks with the Rangers team and they give him tips and support when necessary.

“I’ve played hockey basically my whole life, since I remember,” remarked Ollas, “just growing up, just putting on the skates, just skating around, and then getting into real hockey”

Aside from the statistics, Ollas remains a very unique and valuable player on the Warriors.

Either way, the goalie that sports the #1 in blue and gold certainly has a bright future ahead of him. 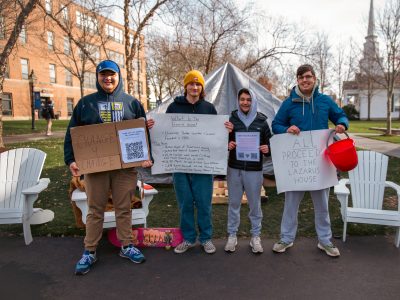 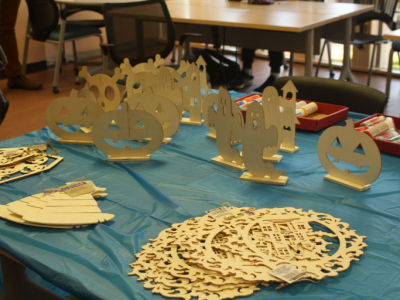 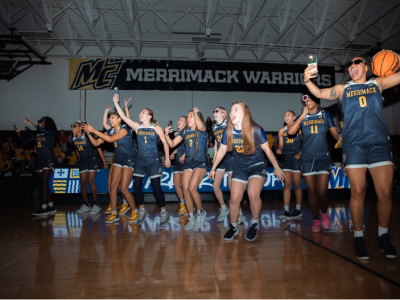