The Era of Hammel 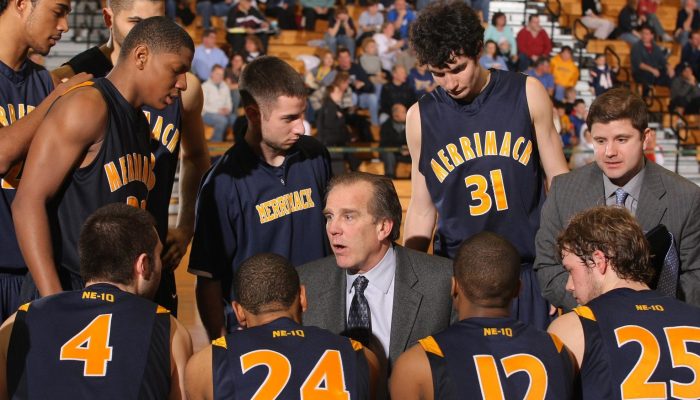 Bert Hammel, the legendary Merrimack basketball coach, passed Oct. 6 at Boston Hospital at the age of 67. Hammel joined the men’s program as an assistant coach in 1974. Only a year later, the head coaching position for Merrimack became available, and Hammel was named the seventh coach in the men’s basketball program history. Hammel spent 36 years serving as the Merrimack College men’s basketball team head coach, before leaving in 2016. To many,  Hammel was more than just a basketball coach, he was a mentor and a leader in different aspects of his life.

With a career mark of 511-479 and a percentage of .517, he ranked 13th in career coaching victories among the active coaches at the Division II level, and tied for 37th all-time Division II. He reached a personal milestone becoming the 46th coach in a Division II coaching position to reach 500 wins. Under Hammel, twenty-nine players of his grabbed Northeast-10 All-Conference honors, and brought Merrimack two Eastern College Athletic Conference (ECAC) Championships. Under his command, Hammel aided Gary Duda in becoming Academic All-American and ranking him among the top three-point shooters in Division II history. He also matured his athletes into coaches, with 15 former players moving into coaching careers at a college level and 9 to a high school level.

“I looked up to Bert, who always had his door open and really cared about us as people. He treated us like men, but aided us in becoming successful on and off the court,” said Stephen Curran, a former Merrimack player of Hammel’s from 1988 to 1992 who was also part of two Northeast 10 Conference titles in 1991 and 1992.

According to Curran, Hammel was always there for people and their whole lives, and never once looking for credit for any of it.“I pulled a lot of philosophy from Bert, from my personal coaching style to how I treat people with respect I encounter every day. He always stressed the importance of being there for us not just for four years but for forty.” After his career as a player, Curran served as an assistant coach and recruiting coordinator at Merrimack College from 1994 to 1999, and is currently the assistant coach at St. Bonaventure University. Hammel was not only a part of Curran’s playing career, but also his professional career, being the head coach at Merrimack when Curran was an assistant coach. Curran stayed in contact with Hammel throughout the years, and speaks highly of Hammel, who he considers a mentor more than anything.

Yet Hammel had an even larger impact off the court, having a significant influence in the local community. He served as a camp director at Merrimack basketball camps, and developed a Academic Basketball Awareness (ABA) camp with the Lawrence Boys and Girls club. Which impacts thousands of area boys and girls. He has been honored twice by the City of Lawrence for his work, and received the 2000 UMass Amherst Sports Management Program Service Beyond Recognition Award for the ABA camp. He also set up the “Read with the Warriors” program, where Merrimack athletes travel to elementary schools in the Merrimack Valley to help young kids with reading.

Hammel also earned  the Literacy Champion Award given by the National Association of Basketball Coaches (NABC) in 2007 in recognition for his program and players promoting education and selfless efforts.  He was also a two-time Paul Schoenfeld Sportsmanship Award recipient, receiving these awards for 1996-97 and 2000-01, which is an award given to only 200 schools in the New England Region for showing good character, ethics and integrity in basketball. Hammel’s ABA camp is one of the few basketball camps held where a GPA is required to attend, showing Hammel’s passion for promoting education and academics.

“Kids looked up to him, and he always gave everyone a chance. Hammel saw the importance in kids past the wins and losses, who he motivated through the game of basketball but cared for as more than just an athlete,” said Curran. “He would find what would make people tick, and was able to relate to everyone.”

Merrimack honored Hammel on Oct. 10 by renaming the Merrimack home court under his name, Bert Hammel Court, due to his impact extending more than three decades.

“Hammel’s legacy will stick forever, and nobody’s name deserves to be on that court more than his,” Curran said.

Hammel’s wake was also held Oct. 10  at Saint Michael’s Church in North Andover, and a funeral mass followed the next day. Hammel’s wife Jill, his daughter Alexandria, and his sons Lucas and Cooper, remember Hammel and his legacy, as well as the entire Merrimack community.