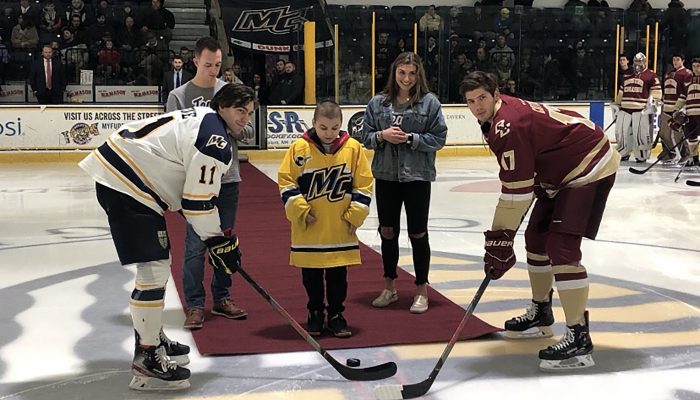 On February 14, fans at the Merrimack Men’s Hockey game at Lawler Rink celebrated their annual Team IMPACT Night. Team IMPACT is an organization founded in 2011 that connects children aged five to sixteen battling serious or chronic illnesses with collegiate athletic teams. These matches create life-altering friendships and fuel a fierce commitment to battling adversities. On the other hand, collegiate athletes are being inspired to lead with empathy and inclusion every day.

Merrimack College has proudly made the most Team IMPACT matches in the NEC and the NCAA, matching a total of sixteen children with a varsity team on campus. The school celebrated these special relationships at the hockey game, kicking off the night with the ceremonial puck drop performed by Caleb Hassan, who was matched with the Men’s Hockey team in January of 2018.

During the intermission after the first period, videos were displayed on the jumbotron featuring Merrimack athletes sharing their experiences with Team IMPACT. They reflected on the sense of community that has developed throughout their time involved with the organization, as well as how their perspective of collegiate athletics has expanded into something much bigger than sports. Being fortunate every day and recognizing what a privilege it is to compete at the collegiate level is being channeled into giving back to those who are not afforded this same opportunity.

At various points in the night during stoppages of play, Team IMPACT trivia questions were broadcasted on the jumbotron to get the fans involved and share some of the organization’s feats.

Some other Merrimack varsity teams were in attendance with their own Team IMPACT player matches. A particularly large showing of support came from the Track & Field team, who spent time with their Team IMPACT match Keelan Pothier, age twelve. While reflecting on the amount of friends he’s made throughout his time on the Track & Field team, Pothier stated, “It’s pretty awesome. Actually, it’s the best.”

Team IMPACT is special because the children truly become a part of the roster, each signing their own Letter of Intent in commitment to a varsity team and spending game days right beside their teammates.

This organization allows children to experience life beyond their diagnosed illness, and emphasizes camaraderie, empathy, resilience, and boldness for everyone who participates.