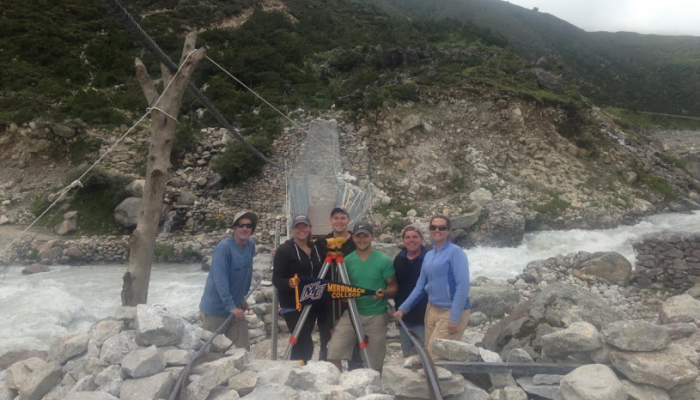 Four Merrimack civil engineering students Peter Foltz, Sean Kraus, Bradley Picard, and Leyna Tobey along with professor Marc Veletzos and assistant professor Cyndy Carlson traveled to Nepal over the summer. The group worked to repair a bridge that was destroyed in the 2015 earthquake that struck the area and killed around 8,000 people. They were able to make the bridge strong enough to last two or three years until a new one can be built.

“This was an amazing experience I will never forget,” said student Bradley Picard.

According to Picard, the bridge is very important to the community because it is one of the few ways that allow people to get to the market to sell goods to earn money they need to support their families. The residents of the area were very thankful for the group’s work.

“The best part of this trip is getting to meet the people within the local communities,” Picard stated, “The people we met were so generous and happy to see us helping out.”

Civil engineers at Merrimack are required to take a Site Design course in which they learn how to survey work sites and use engineering software like AutoCAD. Picard says they were able to figure out how much the bridge dipped by applying what they learned and using the same equipment they used in class.

Among the repairs that the group made to the bridge, Carlson said they ended up changing the bridge from a suspension-type bridge to a cable-stay-type bridge. The work even included a bit of hard labor to remove some rubble that had fallen from the bridge.

Professor Marc Veletzos is on sabbatical leave for nine months in Nepal. According to Carlson, Veletzos was there during the summer of 2015 doing structural inspections after the earthquake. While he was there he recognized the opportunity for the bridge to be a project for engineering students and the idea came to life.

Although the original plan was for students to only survey the bridge so other people could repair it, they found out that it would not be fixed for three years so they changed their plan. Along with Dr. Rob Dowell from SDSU, Dr. Veletzos designed a repair for the bridge.

Carlson says that the Civil Engineering department loves to travel for projects and plans to do more like this in the future and hopefully next summer. Last summer students went to Haiti for a project that dealt with water resources engineering.

“It is a great opportunity for students to see how what they are learning in class can be put to good use in real situations,” Carlson said.

The four students who went to Nepal were selected through an application process.

The students love to go on these trips. Picard says, “I want to use what I know and what I have learned to help people in need, and to make people’s lives easier and more efficient.”

These trips take students to places where they would not imagine going. The Nepal group gained breathtaking views of the Himalayas. Their lodge was located in the village of Thame. Carlson was excited because they were within 20 miles of the peak of Mount Everest and also within 20 miles of Tibet.

The group lucked out with weather that cooperated with them. This gave them four extra days, which allowed them to go to the southern part of Nepal. While there they rode elephants saw wild rhinoceroses and canoed down a river that flows into the Ganges.